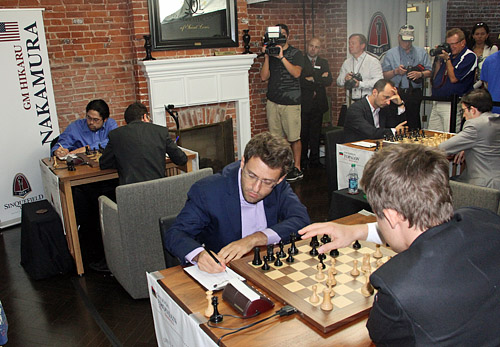 Round nine… hard to believe the tournament is coming to an end.
What a ride it has been! Photo by Daaim Shabazz.

With Fabiano Caruana having already clinched the tournament last round by drawing Magnus Carlsen, the issue was whether Hikaru Nakamura could break out of his funk with what would be a good win for him. Of course it would spoil Caruana’s run, but it would salvage a bit of dignity. The game would in fact lean toward Caruana, but he missed a rather elementary win with 40.Rxg6!+ Rxg6 41.e6 winning easily. Here are the respective reactions from both players with Caruana first…

A HUGE relief for Nakamura who earlier was shaking his head in disgust. A loss here could have been totally devastating for his confidence moving forward. Being one move away from losing and then drawing involved a bit of “luck” but certainly averted a disaster.

Magnus Carlsen was also totally disgusted by his miss of a win against Levon Aronian, though not as trivial as in the Caruana-Nakamura game. The rook ending was very tricky and required a bit of accuracy. After 45…Kh7, Carlsen erred with 46.h6 which according to commentator GM Ben Finegold threw away the win. He referred to tablebases which stated that 46.Kc2! would win by keeping the black rook from reaching b3 and working as an active defender.

Carlsen showed his disappointment (to put it lightly) in a lack of composure rarely seen in the world champion. He gesticulated in an animated fashion and his facial expressions were one of disgust. One wonders if he is loses a couple of games to Viswanthan Anand whether he will lose composure. He did however, let out a smile.

In Topalov-MVL game, this Reti opening was a tense fight, but the imbalances were not great enough for a decisive result. The entire game was equal. MVL has not had a remarkable tournament, but he has had flashes of good play. He called this tournament a good experience since he rarely gets to play in tournaments at this level. He is certainly a force to be reckoned with. 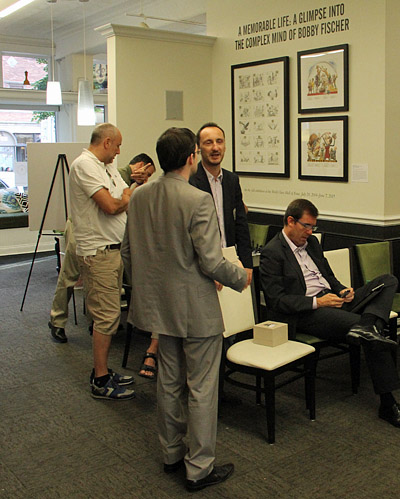