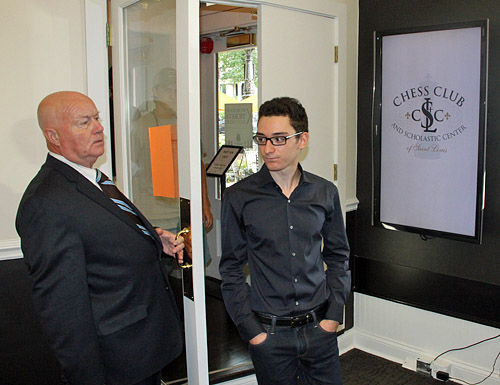 Caruana leaving the playing hall after being held.
Photo by Daaim Shabazz.

There will be no Fischeresque performances in the Sinquefield Cup this year. During the streak there was a question posed to Rex Sinquefield whether there would be a “Bobby Fischer” prize in the future. He only mentioned that it would be expanded possibly to eight players. However, this tournament has exceeded expectations and there will certainly be enhancements in next year’s edition.

Well… everyone was looking forward to the Caruana-Carlsen showdown to see if the Caruana’s streak would be extended and to see if Carlsen could assert his #1 and world championship standing. It appeared as if the fans would get one of these questions answered. The game went into an Accelerated Dragon and everyone was hoping for an exciting battle. Here is the annotated game by GM Alejandro Ramirez.

So it was! Carlsen held Caruana to a draw breaking the streak and finally answering ONE of the above questions. The other… Carlsen was unable to assert his authority and this may be important in later encounters as Caruana won the mini-match 1½-½.

Hikaru Nakamura would want to forget this tournament, for sure. After this loss against Veselin Topalov, the American #1 goes to a -4 and a look of exasperation was all over his face as he left the playing hall with his stepfather FM Sunil Weeramantry and fiance WFM Maria De Rosa. Clearly not the way one would want to defend home turf on the largest stage for chess. 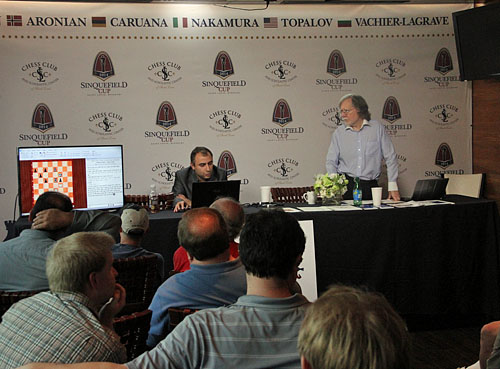 GMs Varuzhan Akobian and Ian Rogers analyzing what would become a debacle for Nakamura. Photo by Daaim Shabazz.

While everyone can see that Nakamura is struggling no one seems to know why. The game went into a Berlin Defense where Nakamura played a novelty that seemed to have promise. One thing that has been noticed is that Nakamura has had problems calculating in critical positions. He missed 30.Bb2 Nd3 31.Rb1 Rg8 32.Kf3 Nxb2 33.Rxb2 Bc8! winning the crucial pawn and snatching the initiative. Topalov continued to press with active bishops and rooks eventually broken through. A devastating loss for Nakamura.

Maxime Vachier-Lagrave dodged a bullet in his game against Levon Aronian. After facing 1.Nf3 d6 2.d4 Nf6 3.Nc3 Nbd7 4.e4 e5 5.g4!? Aronian entered complications and threw 13.Nf5!? on the board and developed a nice initiative. However in a critical position, he erred with 23.Red1? and after 23…Rxh7! white lost his advantage. A three-fold repetition followed thereafter. Here Levon Aronian explained this game…