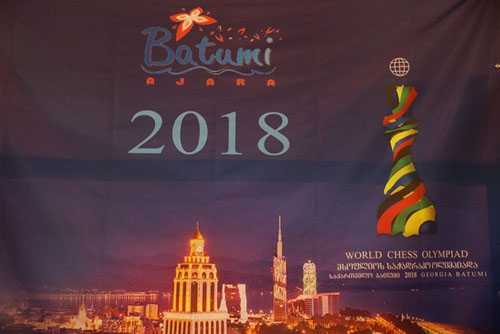 Batumi, Georgia putting in a bid for Olympiad 2018.
Photo by Paul Truong.

The plot thickened today as top teams began to clash. All the top teams faced a strong opponent… except the Ukraine who was held by Norway 2 yesterday and faced a weakened Filipino team today. Defending champion Armenia went down against France with Laurent Fressinet scoring against Movsesian. Armenia seems to be missing the presence of Tigran Petrosian who was so vital to their gold medal run in Istanbul. 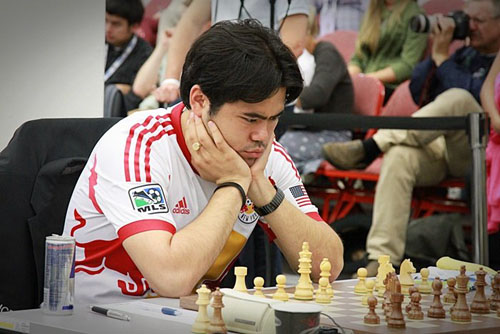 Hikaru Nakamura finally made it!
Photo by chess24.com.

Both American teams stumbled, but the men were slowed by a jet-lagged Hikaru Nakamura who drew with Giri. Nakamru had to spend the night in London, England due to flight changes. Here is one of his tweets:

Can it get worse?? Now I apparently have no confirmed seat on the 2nd and can't even arrive in Tromso till the 3rd evening at the earliest.

Unfortunately in the USA-Netherlands affair, Gata Kamsky was upset by Erwin L’Ami while the other two games were split. Poor start for the U.S. with the women being crushed by China this round. Most of the other top matches were either drawn or decided by a narrow 2½-1½ margins. Poland-Cuba, Italy-India, Turkey-Georgia and Switzerland-Vietnam were drawn, but Serbia, China, Israel and Azerbaijan won narrow margins. 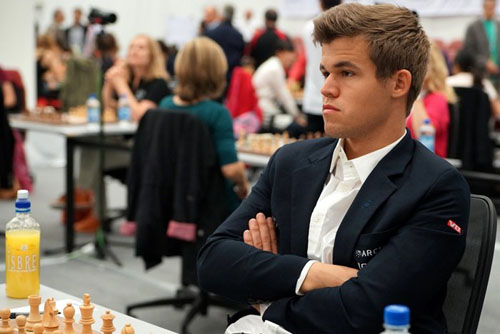 Carlsen in a classic photo before victory.
Photo by Paul Truong.

As for Norway’s Magnus Carlsen, he won today against Montenegro. It has been pointed out that it must be difficult for him to play with so much attention, but perhaps he has gotten used to it. India may have made a mistake in their board order by putting Krishnan Sasikiran on board three as he is clearly the most experienced on this stage.

Fabiano Caruana of Italy won against Parimarjan Negi and moves into #2 on the live ratings at 2805. He mentioned yesterday in a press conference that leaving America to live in Europe was helpful to his development.

As he continues to thrive, he plans to join the championship cycle for a shot at the world title. However, in the press conference he made some implications that chess is not moving in the right direction since the path to the championship was not clear. He discussed the situation of the Grand Prix and while he did not endorse Kasparov, he gave some views about the FIDE election (see video). 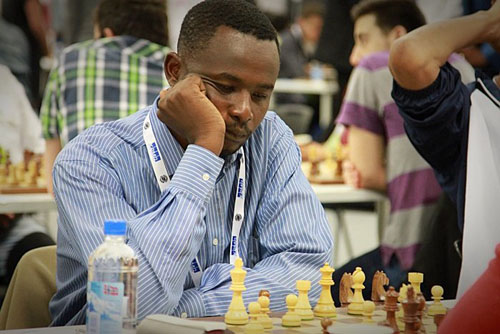 FM Rashid Yaaqoub was part of the Sudanese upset over Ireland.
Photo by chess24.com.

The major upset in today’s round was Sudan beating Ireland 2½-1½ with CM Samir Nadir taking down GM Alexander Baburin. African players are generally underrated due to the inaccessibility of strong tournaments on the large continent. However they are passionate about chess and are gaining access to proper tools to compete. These players are increasingly beating players rated 200-300 ELO points higher, so other teams should take caution when meeting an African team.

The teams in the lower end of the table also began facing each other and long rivalries are shaped at Olympiad tournaments. However, the spirit of meeting other nations in battle is one of beauty as it is intriguing. New friendships are formed and perhaps new diplomatic and economic relations are established.

China asserted their authority over the field with a convincing 3-1 victory over the USA. Hou Yifan dispatched Irina Krush in a game that lasted 91 moves with the World Champion finally pushing through her two-pawn advantage. Ju Wenjun also defeated Anna Zatonskih for the margin of victory. Russia kept pace with a 2½-1½ win over France, Alexandra Kosteniuk winning. Armenia beat the usually overachieving Vietnamese team and Iran crush Bosnia & Herzegovina 4-love.

Top games today are China-Azerbaijan and Germany-Russia. It is a very long tournament, but the fact that strong teams are facing off means that the boards have to be managed properly. On the lower boards, many of the teams are making their first appearances in the Olympiad. We can expect more stories to be told about their respective journeys. 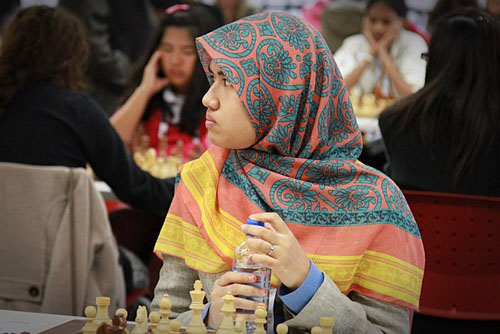 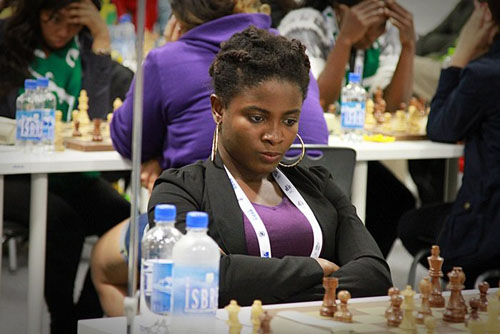 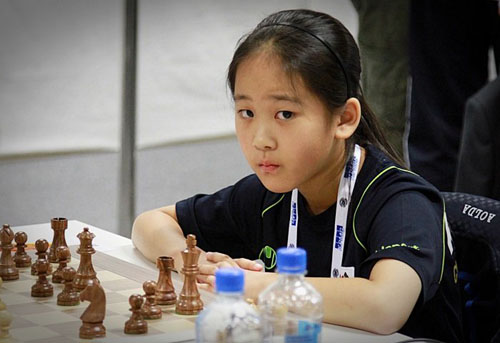