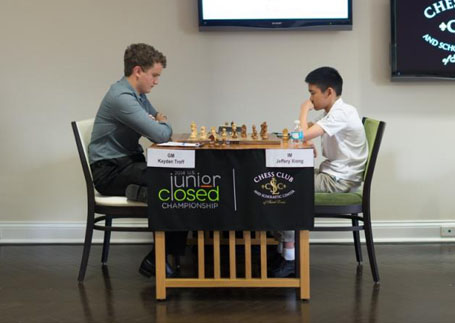 A showdown between the two leaders!
Photo from uschesschamps.com.

The race toward the end has tightened as Kayden Troff is back on top of the field. Troff beat front-runner Jeffery Xiong to take a half-point lead. In a Catalan, black played a bit too ambitiously by sacrificing a pawn for development. White’s structure prevented black from getting coordination. There was a tactical skirmish and black ended up down an exchange for a pawn. White nursed his exchange and managed to get the queens off the board. His passed b-pawn never had to move, but it was the trump that decided the game.

In Sevian-Larson, black showed that he was up for the challenge after showing good preparation. The move 10…Qb8!? was interesting. Sevian stole a pawn with Be3-g5-d8xa5. As the game wore on pieces begin leaving the board and Sevian maintained his pawn plus. However, after nursing the pawn for 30 moves, he inexplicably gave up the pawn with 63…Qg5 and after 64.Qxc3 his advantage dissipated. 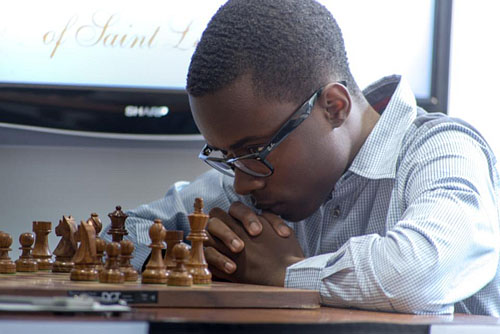 Josh Colas trying to find his way.
Photo from uschesschamps.com.

Williams-Colas is a game between two players who have known each other since the beginning of their chess lives. They have even played a couple of publicized practice matches. These encounters always bring some intrigue given that both Justus Williams and Josh Colas (along with James Black, Jr.) have inspired the African-American (and worldwide Black) community with their respective successes and both receive immense support in New York. So who would win this encounter? It would be a Catalan to decide.

In the opening, Colas made a crucial mistake with 11…f6 and 12…f5 as this weakened the a2-g8 diagonal allowing Williams to seize the initiative with 13. cxd5 exd5 14. e4! (even better was 14.Nxd5!). For the third game in a row, Colas was flailing away trying to get out of the opening alive.

After Williams won a pawn, he kept the pressure. In fact, he actually sacrifice two queenside pawns to focus on black’s weakened kingside. After 26. Bg4 Nb6 27. Re6 Qg7 28. Bxh5 gxh5 29. Re5, black was shredded. Colas had to donate an exchange, but there was too many holes in his position to survive.

Bodek-Harmon-Vellotti was one of two marathon games in the round. Out of a French Tarrasch, Bodek attempted to hold onto a free pawn. Ultimately he had to give it back, but found some nice resources in the middlegame including a couple of nice zwischenzug moves. A queen ending ensued and while white was a pawn up, he had to contend with black’s outside passed a-pawn. Unfortunately, black blundered it away in time pressure and Bodek converted cleanly.

In the longest game of the room, Shen-Ostrovskiy played a “topsy-turvy” game where black sacrificed an exchanged (15…Rxf3) for what seemed like inadequate compensation. White played actively so that black would not achieve the usual central pressure. The continued on when white begin to make some inaccuracies.

What happened in the ending was novel. While black had an extra piece, it wasn’t clear how he would win, but then white’s king got trapped on the edge of the board and black weaved an improbable mating net by running his king from b7-c8-d7-d6-d5-d4-d3-c2-b1-b2.

The final finesse was beautiful after 104. Rh5 Nb5 105. Rxb5 Rc3! 106. Rc5 Ra3#. Shen showed a bit of class by allowing mate. Commentators were suggested that white should have traded rooks and played b5 attempting to get at the a6-pawn and achieve a draw. However, black wins by one tempo in that line. Nice finish by Aleks!