Kayden Troff holds onto the lead at the 2014 U.S. Junior with a stroke of fortune against a beleaguered Josh Colas. After a hard-fought contest, Troff capitalized on an unfortunate blunder of Colas after 46.Kg2?? which cut the white king off from the advancing passed pawn. He remains a half-point ahead of a surging Michael Bodek who has won three out of his last four and plays Colas in the last round. Troff, who has won three in a row will play Matt Larson, who has had a good showing despite being the lowest rated.

Ostroviskiy-Harmon-Vellotti has an interesting game out of a Trompowsky. White offered a pawn for dynamic play and seemed to have gotten a plus after a nice tactic 26.Bxf7+. It turns out that this series of exchanges yielded nothing to either side and the result was a complete logjam with neither side able to penetrate.

Xiong-Bodek started out as a Sicilian Dragon 9…d5 variation. Black usually gets play if white accepts the pawn sacrifice, but white declined and tried to play in more conventional fashion with play on the h-file. However, black got tremendous play and launched an attack of his own. Black sacrificed a piece, but it wasn’t clear that he was winning. 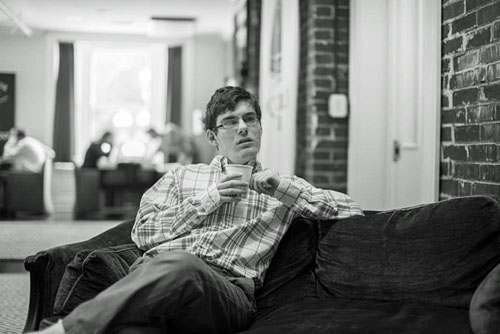 Michael Bodek is only a half-point out.
Photo from uschesschamps.com.

The game seemed headed for a perpetual check, but Xiong erred on 43.g5+ and allowed black to establish very dangerous mating threats after 45…Rb7. Unfortunately, there was no response and white donated a rook, but without any chance for a perpetual or skewering the black rook.

No one knows how Josh Colas has fallen into a tailspin. This probably has not happened to him in a very long time. What is interesting about this young master is his ability to bounce back and recover. After losing three bad games, Colas would face Kayden Troff the top-seed who was gaining momentum.

The game would be a Najdorf and Colas played the increasingly popular 6.h3. However, he did not continue with the usual g4 idea, but 8.Bg5 instead. Neither commentator had seen this line. In the games listed in the database, black has not fared well.

Larson-Williams was a game with a very strange opening, but the black was able to equalize. The game begin to have a bit of an imbalance after 23…Bxe2 24. Nxh6+ gxh6. This kingside weakness would come back to haunt Williams. Perhaps one move that allowed white to get a permanent advantage was 37…h5? weakening more squares in front of the black king and fixing the h5-pawn. Still black had chances to solidify the position with 43…a6, but went for exposing the white king. In fact it was black’s king that was exposed. White was able to play 48.Rf4 stopping all counterplay and with black’s rook out of play, white launched an attack that proved decisive.

Shen-Sevian saw a Modern Benoni that truly got out of hand for the white pieces. While while had an impressive center, black raided the queenside and got a lasting advantage after 26…b4 27. Ne2 c3! 28. bxc3 b3 29. Bb1 b2. This totally tied up white’s position and the game didn’t last another ten moves. Black finished the game off with the neat 36…Na4! because on 37. Qxa4 Rxc3+ 38. Ke4 Qg2+ the white king is mated.