After the rest day, there were some disastrous results giving a sign that perhaps fatigue is starting to become a factor. This is a high-pressure event with thousands watching and several of the games had gross mistakes.

Ostrovskiy-Bodek was the most intense in the round with both players going blow-for-blow. The post-mortem went on for an hour as both were looking at odd ending including the three pawns versus the bishop. All seem to be drawn.

This game started as a Trompowsky Attack as the game became an opposite-wing battle. White was expanding on the queenside with a phalanx of pawns while black was conjuring up an attack on the kingside. At a critical moment, black sacrifice a knight for two pawns with 26…Nxe3 to go along with two pawn plus. However, white’s pieces were mobilized before the pawns could start rolling. Thus a fortress was created and white was able to stave off the pawns to collect the half-point. The other games had disastrous outcomes.

In Harmon-Vellotti-Troff, black met white’s 1.e4 c5 2.b3 with some improbable moves of his own. Was Troff improving on Bodek’s idea of early …g5? Black launched a caveman attack with 9…g5!? and continued with a pawn storm with his king in the center. However, white had no way to pry the center open. Black blasted open the kingside after 12…h5 13. g3 g4 14. Qe1 h4 15. gxh4 Bh6.

White was still holding the position until 16.Bc4? when some moves later, black got a powerful attack after 19…Rxh4. In fact the attack was unstoppable. Black ended with a nice parting shot of 23…Rxh2! when white is going to be checkmated. 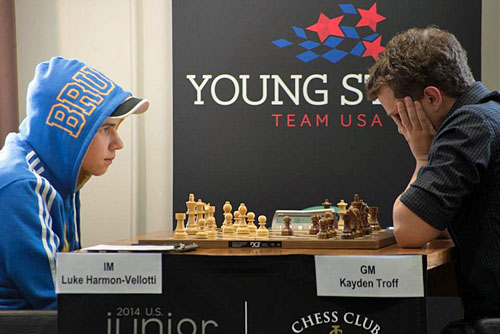 Luke Harmon-Vellotti was the victim of a kingside blitz that not even a UCLA Bruin could stop. Photo from uschesschamps.com.

Heartbreaking loss for Justus Williams against leader Jeffery Xiong. After playing a roughly equal game throughout, the players got into a bishop ending and seemingly headed for a draw. Williams missed a subtle detail and got his move order mixed up.

Colas-Sevian was a disaster for the white player. Colas had tried the London System with mixed results so he opted back to his roots with 1.e4. This may show that he is unsure about his opening choices. In this game he stumbled once again as black was able to equalize fairly easily with 7…d5. After that Sevian offered a pawn for rapid deployment of his pieces and the white king was already scampering by move 12.

Colas nestled the king onto f2 but black’s pieces were fully armed after 17.Rae8. White tried to hold the position together and unravel, but the game came to an abrupt end after 28. g4? Rxe4 29. fxe4 Ne3+ 30. Kh3 Rf6 31. Qe1 Nxg4! 32. Kxg4 Rg6+ 33. Kh3 Qe6+ with mate in one. Incidentally, white never got a chance to move two of his pieces the entire game. Tough lesson for Colas as he will certainly refine his opening preparation after this tournament. 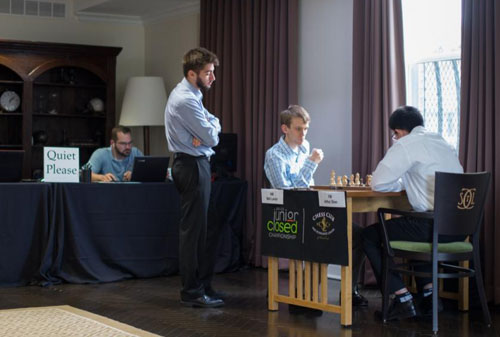 Larson-Shen was an exciting battle. Another weird opening ensued and transposed into a Four Pawns Attack King’s Indian. White had a unique idea with 8.Nh3 and then moving the knight to f2-g4-f2-h3-g5 to force weaknesses. In fact, white could have played 25.f5! with a strong attack. He opted for 25.e6 allowing black to plug up the kingside with 25…f5. However, Larson was determined and sacked a bishop with 27.Bxf5, but the complications did not favor him.

After the smoke cleared black had scored two pieces for a rook and was completely winning after 33…cxb2. Ultimately, black would have four pieces for a rook. The rook was helpless and white was actually being woven into a minor piece mating net when he resigned.