Today’s round of the U.S. Juniors was wild and wooly with four more decisive results. Matt Larson got into the winning column with an impressive victory over Aleksandr Ostrovskiy. The 300+ point difference did not matter… at least in the mind of Larson. In fact, commentator Ben Finegold was discussing Larson’s air of confidence in saying that the young player often engaged in “trash-talking”. This game will certainly boost his confidence. 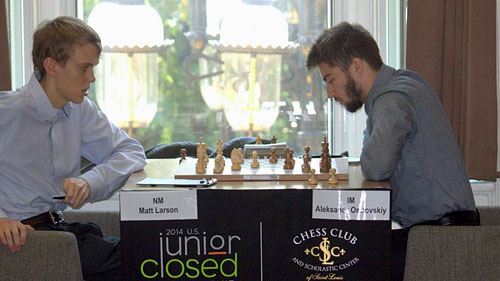 NM Matt Larson got his first win in impressive fashion.
Photo from uschesschamps.com.

In this Semi-Slav, white played the sharpest of lines sacrificing a pawn for strong development. Larson expertly shifted his queen to the kingside and it was now obvious that he was up to no good. With all of his pieces aimed at the vulnerable black king, he suddenly pounced like a tiger on his prey. On 20.h4 and 21.h5 white pried black’s kingside and then continue his battering with 23.f4! Then he started sacrificing pieces for checkmate. This was a textbook attack that bore fruit after 28.Rxf7+! when black was slain after a short chase. Nice win for the hometown favorite.

In another brutal battle, Arthur Shen caught Josh Colas’ king flat-footed and it never got off of the e8-square. In this Sicilian Paulsen, Colas played the standard moves until 9…d6. At this point the commentators were wondering whether he should play 10…b4 or 10…e5. Sometimes black plays …Ne5!? as well. Colas opted for 10…b4?! and was hit with the typical sacrifice 11.Nd5. While this sacrifice doesn’t give white a decisive advantage in this position, Colas appeared to panic. 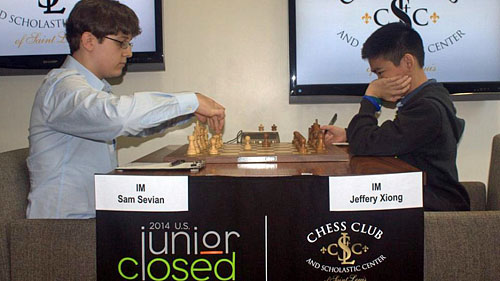 In Sevian-Xiong, the tournament leader suffered his first loss and inexplicably dropping a pawn after 25.Nxb6! White would win another pawn with 39.Bxd6! effectively ending the game. Xiong is still in first place, but it’s a tight race. Williams-Harmon-Vellotti was a hard-fought game out of a Queen’s Indian. It appeared that Williams carried a nice spatial advantage in the middle game. The game got a bit messy, white lost a pawn and had to play actively to secure a draw in a rook ending.

At the beginning of the round the commentators stated that they like white in all the games and white was up 3-0. Black got a breakthrough with Michael Bodek’s win over Kayden Troff, the GM’s first defeat. Everyone has tasted defeat in the tournament. In this game, Troff’s Catalan was unable to create the lasting pressure and black was able to get good play.

The game still should have been drawn (with opposite-colored bishops), but Troff erred in the ensuing ending by trading rooks. Black played some star moves (44…e5!) after activating his king and raiding white’s kingside. In the final position, white has no moves and is in total zugzwang. Bodek is back in the hunt and only half-point back.