Today would be the day that the World Champion would make a strong stand to retain his title. Many expected that Viswanathan Anand would play something a bit more daring and thus change his opening choice against challenger Magnus Carlsen and his two-point lead. They also felt that it was time for a change after three innocuous attempts at 1.e4. Anand was up for the challenge and 1.d4 was played. Carlsen responded with a Nimzo-Indian after which Anand replied with an aggressive Samisch variation after 4.f3.

The game continued on and Anand entered an uncommon “tabiya” after 10. g4. This move drew applause from fans and commentators alike. If the champion was going to reliquish his title, he would do in leaving his full energy on the board. Nigel Short was one who applauded this decision.

Definitely the right strategy by Anand, regardless of the objective merits. The position is very unbalanced #AnandCarlsen

Looks like Anand has finally come out swinging. Today should be interesting.

This was a “do or die” situation and perhaps Anand has chosen correctly. An unusual opposite win attack occurred and white expanded with 22.f5. This menacing armada of pawns threatening to batter down the wall to the black king. Carlsen knew that Anand was going to try to checkmate him. If he had any doubts before, 22… b3! 23. Qf4 Nc7 24. f6 g6 25. Qh4 Ne8 26. Qh6 would have revealed the plan. However, former champion Garry Kasparov had a different view and it was shared by the chess engines…

After thinking about Anand-Carlsen game 9 more on the plane, I'm more convinced that 26.Ne2 was last best winning chance for White.

Anand forged ahead with all his might after 27.Rf4! allowing black to queen with check after 27…b1(Q)+. This was a crucial moment. However, Anand almost immediately played 28.Nf1?? giving access to the h4-square and after 28…Qe1 white resigned since black can now sacrifice his new queen. Anand has nothing more than to resign since white’s attack would be easily quelled after 29.Rh4 Qxh4! 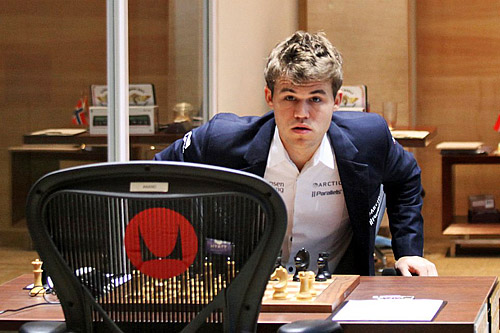 Carlsen rose to the occassion.
Photo by Anastasia Karlovich.

The press conference was very grim as if there was a mourning taking place. However, both players answered the questions forthrightly. Anand was perhaps a bit more talkative today considering that he has to explain such a fiasco. He was very noble, but it was obvious that disappointment filled the air. Twitter exploded with labels such as “end of an era” but most of all, there was a sad feeling for Anand who personifies all that is to like about chess sportsmanship. In fact, Carlsen came to the defense of the champion when asked about the pending “end of an era” question by simply saying, “No… let’s be correct this time.”

Of course, this match has turned out to be disastrous despite the initial fanfare of his home support. Tomorrow may begin the coronation of the new champion and would further unify the title in that the highest rated player would be the world champion. However, there are three games left and if there were ever a miracle in chess, winning three games in a row against Carlsen would be it.