Perhaps Magnus Carlsen gave his cook a night off and tried the spicy cuisine. Given the pyrotechnics on the board today, perhaps both players were in a fighting mood. A placid and positional Berlin quickly turned into an inferno. Game four showed that the players have settled into the match and are willing to press for a win.

Anand started with 1.e4 again and Carlsen responded in kind with 1…e5. The game entered a Berlin Defense which Vladimir Kramnik turned into a serious weapon in the unofficial championship match versus Garry Kasparov. Kasparov, who made several comments on the game, reflected on this choice.

After I lost to Kramnik & failed vs his Berlin in 2000, many said it was still lousy, only good against me. Now every top player uses it!

So the Berlin it was.

Carlsen had perhaps some in his preparation since Jon Ludwig Hammar is a Berlin aficionado. This almost paid off in a big way, but not without a little assistance from Anand. The champion actually admitted going astray a bit and even admitted to being “lost” after black snapped off the pawn at a2. Kasparov actually thought the idea had merit, but the optimism faded after 31…g6! White did establish an advantage in space but this move now put white’s position under pressure.

Anand then realized he had to play actively to avoid the untangling of black’s pieces. The prognosis was grim and many felt that Carlsen was inching toward a winning position. The moment came with 35.Ne4! sacrificing yet another pawn. After 35. Rxg4+ 36. Kf2 Rf4+ 37. Ke3 Rf8 white played 38. Nd4! Carlsen started shaking his head and was visibly disappointed. He had complimented Anand after the game for finding a wealth of resources.

There was another moment of panic after 40…Rd8+. It was assumed that Anand would opt for 41.Ke3… even Houdini evaluated the position a 0.00. However, Anand played 41.Kc3!? which got a howl from Nakamura.

Had he blown it? Indeed 41.Ke3 looked more normal, but perhaps Anand had seen the rook ending and felt that he had no realistic chance of losing the game. Besides he was falling woefully low on time. As the game went on, there was still some work to do to save the draw. Anand had to trade his e-pawn for black’s g-pawn… but how?

The fourth game of this world championship match is the most exciting game yet and praise was heaped upon the fighting spirit of the players. It is clear that both players are now comfortable in their match surroundings and have established a mindset suited for battle. 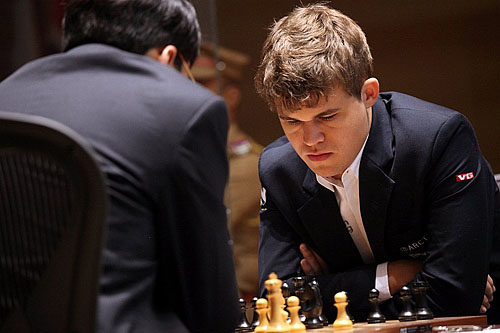 Carlsen may have missed his best chance, but it is not certain where he had the decisive advantage. Photo by Anastasia Karlovich.

In other news, Kasparov left Chennai after being in the middle of a controversy concerning his presence at the match. He insisted that he was not there to assist Carlsen or to campaign, but there as a spectator. There were apparently miscommunication as Indian organizers did not seem to know how to handle Kasparov. After it is said that Kasparov did not have access to the press room or commentary booth, Georgios Makropoulos clarified by saying Kasparov “can go anywhere he wants.” 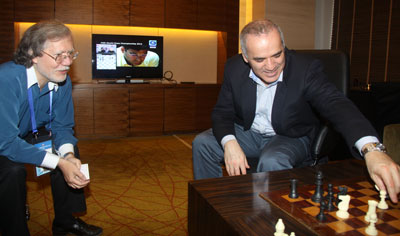 Kasparov is embarking on an Asian campaign tour starting in Indonesia and following with Singapore, Thailand, Philippines, Macau, Hong Kong. It will be interesting to note his trip to disaster-stricken Philippines. Philippines is a rising chess power, but certainly it will be difficult for Filipinos to think about anything other than how to rebuild a troubled nation.