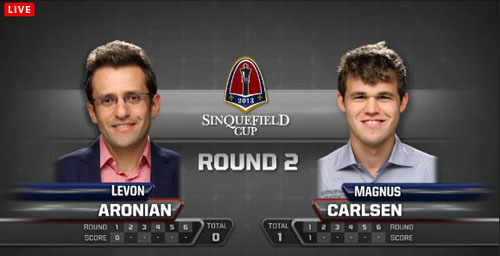 In Aronian-Carlsen, the Norwegian trotted out the Leningrad Dutch Defense, a rare opening at top level, but one in which Carlsen said was an aggressive try. The two players have played at least 63 games and perhaps it was time to make a change. Carlsen drummed up complications immediately attacking the dark squares with 11…Ng5!? As the game wore on there were some rook gymnastics and Carlsen shuffled his rooks back and forth probing for a break. Unfortunately, the break never came and the two players shook hands.

Commentator Maurice Ashley had proposed an enterprising exchange sacrifice entailing 28…Rxd3 29.Rxd3 Nxc4. There was another exchange sacrifice involving the dark-square bishop as well. In the post-mortem, Carlsen stated that he should have tried to sack the exchange and/or play for …b5, but felt he would be able to push in a less radical way. The computer gave black a slight edge, but with the rigid pawn structures, it was hard to avoid exchanges along the file and a massive blockade. 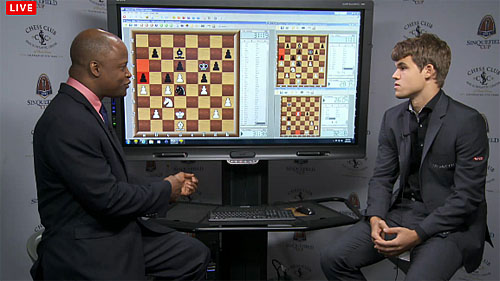 Yesterday, Carlsen said he intended to “kick Aronian while he was down” after his loss. Well… Carlsen was not able to do this. In fact Aronian is very much alive in this tournament as he will face a beleaguered Gata Kamsky tomorrow.

In Nakamura-Kamsky, both players half-hardheartedly greeted each other showing the rivalry. Nakamura would be playing the white pieces for the second consecutive day and again he would choose 1.e4. What would Kamsky reply with? Berlin? Marshall? Breyer? To the surprise of the commentators, Kamsky played 1…c5! and employed the Paulsen Sicilian after 1. e4 c5 2. Nf3 e6 3. d4 cxd4 4. Nxd4 a6 5. Nc3 b5!?

The game heated up quickly and GM Maurice Ashley excitedly went through the databases after the stunning 11.Nd5! only to find that it had been played at top level. In fact, Nakamura had played the black side of it against Vugar Gashimov (drawn).

Nakamura blasted open the position with 17…e5! in order to get at the black king. It was clear that the black king was exposed, but the d7, e6, f7 formation was a hard nut to crack. Kamsky goaded Nakamura to fish for an h7-pawn so he could reorganize his forces. The black king scurried from e8 to c7 before Kamsky played 27…e5!?

It appeared as if black got some space, but then things turned sour after 35.Qc5 as the initiative swung in white’s favor. Despite time pressure, Nakamura played very strong moves meeting 37…Rxf2 with 38.Qxd8! (diagram on left) In the end, black saved his exposed king but would enter a completely lost ending.

Thus, Nakamura sits atop the field with a perfect 2/2 on the eve of facing his nemesis, Magnus Carlsen. Nakamura will be fully motivated as he is winless in 20 encounters with seven losses and zero wins. When Ashley asked Nakamura about the matchup, he was a bit coy in his response, but it is certainly a big game for the American to show that he is still an equal rival and a future championship contender.