Preview: Lots of subplots in this round. Magnus Carlsen has a two game winning streak, but he is facing a tricky opponent… Vassily “The Vanquisher” Ivanchuk. The Ukranian has been beaten handily by Carlsen and is on -6 in classical play, but he has a chance to change the complexion of the event with a win. Even a draw would be good given the head-to-head account. Svidler-Gelfand will see two players of similar styles. Svidler has a +3 advantage and has lost to Gelfand only once since 2001 (… at the 2008 Tal Memorial). 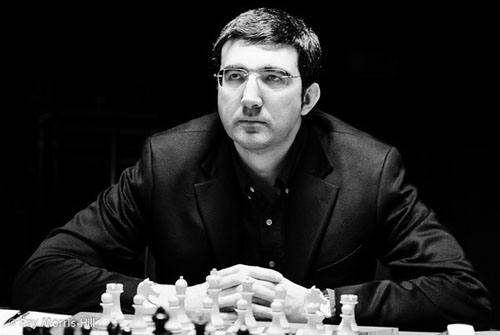 Vladimir Kramnik will be tested by Aronian.
Photo by Ray Morris-Hill.

Kramnik-Aronian will be a classical battle between titans separated by only one ELO point. This could be a key match in the tournament since both will be watching Carlsen. Kramnik has handled Aronian very well, but the Armenian will come well-prepared. Kramnik last defeated Aronian at the Istanbul Olympiad, but that did not stop the Armenians from winning gold. Will Aronian exact revenge?

Grischuk-Radjabov is a battle by two young players who have competed against each other since their junior days. Their record is about even, but both are trying to find a good playing rhythm. Grischuk seems a bit sluggish this tournament. His loss against Carlsen was unnecessary as he was impulsive. This game will most likely see a decisive result.

Overview: Craaaaazy round of chess today in London. All games were drawn but it is uncertain if anyone on earth can explain these games. Vassily Ivanchuk appeared to have Magnus Carlsen in a headlock against the Grunfeld Defense, but the Norwegian was able to secure the balance and the half-point. 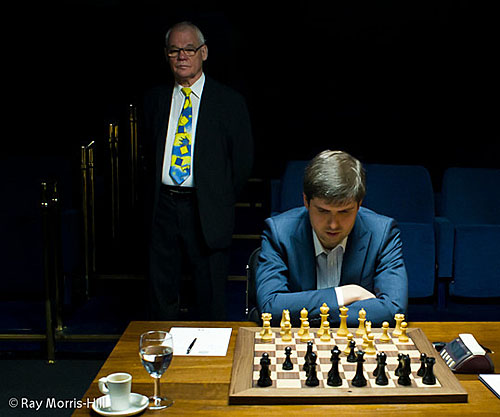 This rather classic and serene photo of Peter Svidler was in contrast to the tornado he unfurled on the board against Boris Gelfand. Photo by Ray Morris-Hill.

Svidler-Gelfand was absolutely a brawl as the Russian befuddled the commentators with a series of moves 18. d5 cxd5 19. O-O-O d4 20. Nb5 Qd5 21. Qh3 Rfc8+ 22. Kb1 Rc6! and now GM Nigel Short was gobsmacked by 23. e6!?! Both he and IM Lawrence Trent worked out a few lines and upon further examination, it was apparent that Svidler had conjured up some complications. However, the game would fizzled out quickly when both sacrificed their queen within a few moves of each other. Thrilling!!

Kramnik-Aronian was an interesting encounter as the Russian essayed his “Killer Catalan”. After some middlegame tension, the game saw mass exchanges and an opposite-colored bishop ending where black was able to blockade two connected passed pawns rather easily. Instructive endgame lesson.

Another unbalanced game in Grischuk-Radjabov, but no decisive result. Radjabov attempted a piece sacrifice with 34…Bxc5 35.bxc5 Qxc5 for three connected passed pawns. As the black pawns mobilized in a formation, the white knight (after 40.Nd1) started galloping around the board and came back just as the pawns were ready to roll forward. The knight return the sacrifice for two pawns and they shook hands a couple of moves later.

Be Someone 2013 Spring Break Camp!