Fortunes turned again as the unpredictable Olympiad entered its penultimate round. Marquee matchups promised fighting chess… and that is exactly what happened. China-USA pitted two of the brightest stars in chess in Wang Hao and Hikaru Nakamura. That game tipped and turned, but ending in a draw. Actually Akobian-Bu was the first to finish and after the Wang-Nakamura draw, Wang was seen in the lobby in a very happy mood. Why? Because his compatriots were better in both games! Kamsky was struggling against Wang Yue and Onischuk was a pawn down against the relentless Ding Liren.

Kamsky was finally able to find a hold in the position while Onischuk was seemingly holding his position as well. Then disaster struck. Onischuk blundered with 55…Rh1?? allowing white to gain two connected pass pawns and in ten moves he was resigning! This resulted in Nakamura tweeting,

The cruel and harsh reality of playing in a team chess event is that you are only as good as your teammates.

Retribution was swift and many felt that Nakamura’s comments were poor in taste with one round remaining. Nakamura responded saying he was making a general comment about the dynamics of team events. Nevertheless, medal hopes are most likely dashed for the USA as China, Armenia and Russia are joint first at 17 points.

Russia beat Argentina as Dmitry Jakovenko was able to save an ending against GM Sandro Mareco. Argentina was out-rated by 100 points on each board and had been playing above their level the entire tournament… however they were to be denied this time. Armenia walloped the Netherlands 3-1 and Aronian and Akopian scored for Armenia. The matchups in the finale are: Ukraine-China, Hungary-Armenia, Russia-Germany.

China has been in the position to win the gold the entire tournament, but those dreams were nearly quashed when they had difficulties with the tough Kazakhstani team. On board four, Ding Yixin overlooked a simple skewer netting the clear exchange with 23.Be5. Ding played on, but Davletbayeva’s nice 52.Rf2! ended the affair. 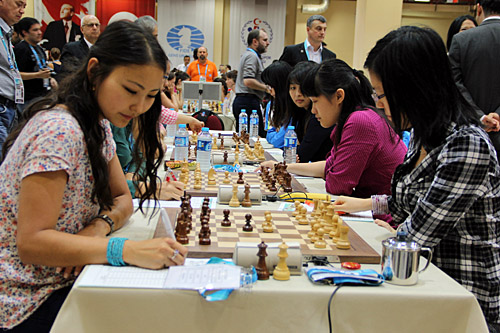 Kazakhstan was able to stop the Chinese freight train.
Photos by Daaim Shabazz.

Russia blasted Armenia to put them in joint first although China would have the edge in tiebreaks. The Ukraine stayed in contention beating Poland 2½-1½. France and India, both missing top players, won (Azerbaijan and Israel) to continue their quest for medals. They will face each other in the last round. Russia will face Kazakhstan and China faces Bulgaria in the finale. Both are virtually a lock for a medal… only the color is in doubt.