New in Chess gets makeover 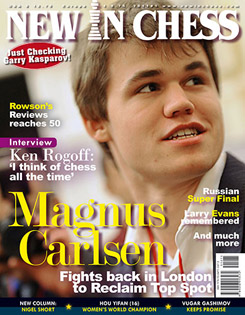 One of the world’s premier chess magazines has just gotten a makeover. New in Chess unveiled a sleeker, graphically-enhanced design with its typical quality journalism. The first issue (released back in January) featured Magnus Carlsen on the cover and the enlarged format seem to make the chess personalities bigger than life. The current issue features Hikaru Nakamura’s win in Wijk aan Zee.

The size is roughly about the size of a sheet of paper (U.S. standard size). The Dutch publishers no doubt made a careful decision in determining the size for no less reason than the cost of production and storage. However, the larger size means more content on the same 106 pages.

While the new format received some heaping praise, there were some expressing “utter disappointment” and calling the new design “overambitious,” “garish” and “ostentatious”. While most will be at pains to see the old compact format leaving, the quality has not diminished and the layout represents a bold step in one of the few remaining chess magazines that is not tied to a federation.