Since Garry Kasparov bolted from FIDE, there has been the question of whether a player should be both the highest-rated player and the declared World Champion. Although Kasparov forfeited his official crown, he continued to have credibility as the world’s strongest player and was able to stage a championship match against a hand-picked Vladimir Kramnik in 2000. Surprisingly Kasparov lost the controversial match while still at the height of his powers. Despite this setback, Kasparov’s #1 ranking still held high credibility. 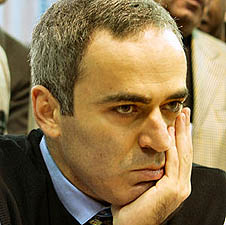 Garry Kasparov in 2005 after retiring from professional chess.

While he had become the second player to reach 2800, Kramnik was certainly not the dominant player that Kasparov had been. Attempts at a rematch were unsuccessful. In frustration with the unification process and the Ruslan Ponomariov debacle, Kasparov abruptly retired after the Linares tournament in 2005. The chess world was still divided on who was the rightful holder of the World Championship. This was the second time Kasparov left the chess world. 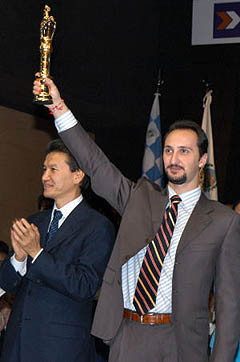 In 2005, Veselin Topalov triumphantly hoisting his championship trophy
in great splendor for all to see. Photo by ChessBase.com.

With Kasparov retired and the championship still divided, ratings seemed to carry tremendous weight. Veselin Topalov begin to gain more attention while winning every tournament in sight. Meanwhile, Kramnik’s title was losing luster rapidly. He finally defended his title in unconvincing fashion against Peter Leko, needing a win in a last game to tie the match and keep the title.

Eventually, with Topalov rising, he eclipsed 2800 and bolted to the top of the FIDE rating list. As part of the ongoing negotiations to unify the FIDE cycle, a championship tournament was held with eight of the top players. Kramnik refused to participate since he felt the championship should involve a classical match.

Topalov won FIDE championship by virtue of his victory in Mexico in 2005. Thus the #1 vs. World Champion was still a very murky issue. Kramnik still claimed to be the rightful holder, but his rating had dropped to #5 on the FIDE rating list. A year later, Topalov had even scoffed at the idea of playing Kramnik because of the rating difference.

There’s a big difference in our ratings. In chess 60 Elo points mean a different class altogether. If Vladimir was offered to play against someone 60 Elo points below himself he’d simply burst out laughing.

At this time, Kramnik was battling rheumatoid arthritis and was certainly struggling in tournaments. Despite the trash-talking, Topalov agreed to play Kramnik and lost in the famous “Toiletgate” match in 2006. 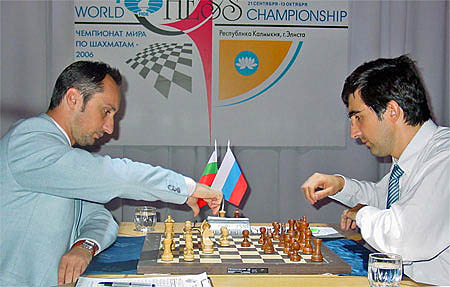 Kramnik had then reclaimed the classical title, but he was still outside of the official cycle. Fast forward… after many negotiations, they decided to have a World Championship tournament in which eight players would vie for the world title.

Viswanathan Anand won the title in 2007 in Mexico and soon after eclipsed 2800 once again. HOWEVER, Anand’s crown still was tainted since had never won the championship in the traditional match system. Kramnik even doubted the authenticity of his title even though Anand had followed all the rules set forth. It appears that both Topalov and Kramnik lacked the grace of Anand when they belittled the accomplishments of their peers. However, the title was consummated when Anand beat both Kramnik and Topalov convincingly in separate matches to win the unified world championship. 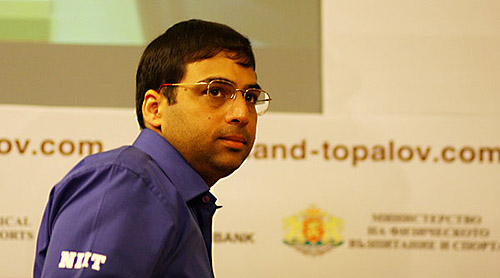 Anand during his match with Topalov in Bulgaria.
Photo by Europe-Echecs.com.

Today we have another shooting star in Magnus Carlsen, who held the number one spot for most of 2010 after winning tournament after tournament. However, he has not had the history of championship matches, nor has he been at the top of the list very long.

In November 2010, the Carlsen management team announced that he would not compete in the Candidates’ Cycle. His decision has been met with a lot of criticism from fans and players alike. The reasons given by Carlsen’s management team were based on Anand being seeded directly into the final as opposed to playing as a candidate as well. One speculation is that Carlsen’s lack of match experience was part of the issue. 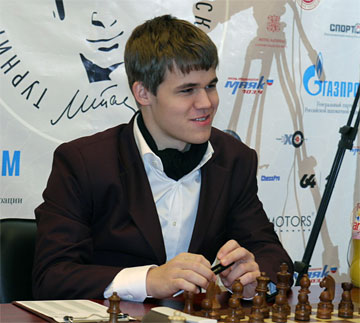 Who has the most leverage now… #1 or World Champion? While most of the top players had been critical, Teimour Radjabov has supported Carlsen’s move with these statements,

I think that Magnus Carlsen was absolutely right to act as he did. He’s number one on the world rankings, he’s won a large number of super-tournaments (often with a big gap over second place), so he has the image of the strongest chess player in the world.

Does being the number one player give one that right? In Kasparov’s case, he was a dominant player, had held the championship for 10 years and was the #1 player for 20 years until he retired. Kramnik, Topalov and Anand have been at the top of elite chess for decades and all have held some form of championship.

Currently, Anand has all the leverage having defended his title twice and having won in every format (knockout, tournament, match) and having followed all the rules of the cycle. It appears that one’s lengthy tenure in the elite, past world championships, and length of rating in the top five provides the most leverage. Carlsen has not yet reached this status. Will Carlsen ever get a chance to face Anand in a World Championship? Photo by Gérard Demuydt (Europe-Echecs).

Many have stated that Carlsen was naive to leave the cycle and that his rating (only four points more than Anand) did not provide enough leverage to demand those actions. There were some very interesting discussions on several of the top chess sites including Daily Dirt and Chessvibes.

With the Candidate’s tournaments coming in April, Carlsen will be watching very closely, but time will tell whether he will have his regrets for not playing. While many believe he has championship potential, there is no guarantee that he will be able to negotiate in the future having twice abandoned the process. His leverage seems to hinge on his number one status, but of course there will be many suitors vying for the crown.