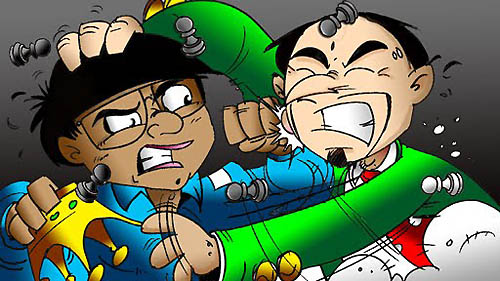 This illustration was done by Mike Magnan of Toronto. Magnan is one of several talented chess cartoonists which include José Diaz for Chessvibes and Rene Duret for Alexandra Kosteniuk’s site. These types of images will certainly make chess appear to be more friendly.

Viswanathan Anand may have missed a crucial chance to put pressure on Challenger Veselin Topalov. The World Champion was unable to cash in on several opportunities to obtain a winning advantage and had to settle for a disappointing draw.

Topalov made a daring attempt to unbalance the game by playing 20…exd4!?! and giving up two rooks for the queen. A tense battle ensued and the black king had little shelter to survive the onslaught of white’s pieces. Perhaps the first misstep was Anand foregoing 33.Nxe6?! instead of 33.Ne4. One misstep is Anand playing 40.Rh8+ allowing the black king to escape the back rank.

The final mistakes were 62.Rc5+ (62.Rdd7!) and 64.Kg3? allowing black time to promote his passed pawns. White was forced to sacrifice his knight and black was able to gain a perpetual check. (See Game#9)

There was a lot of talk about the quality of the game and the missed chances for Anand. Many discuss fatigue as a factor for Anand given his pre-tournament travel problems. However, if Anand loses this match, this will be the game most under scrutiny. Topalov will open Game #9 and is without pressure to force the issue. He will be content to go to tiebreaks now that his opponent appears flustered.

Posted in World Championships | No Comments