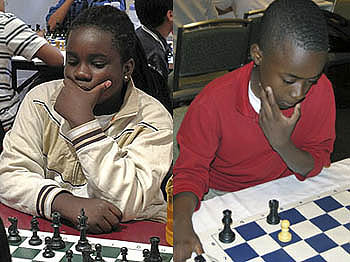 Justus Williams and Josh Colas will face off in their second match. This match will be the best-of-five and Game/60 time control.

In October, two of America’s brightest stars faced off in a highly-anticipated blitz match in typical New York tradition. The match with Justus Williams and Josh Colas was followed widely. Josh prevailed 9-3.

Since then, both 11-year old boys have continued to improved and have soared over 2100. Given the parity of the two chess All-Americans, another proposed match has been scheduled for February 19th at I.S. 318.

Sponsored by Chess-in-Schools’ Shaun Smith, the five-game match with a time limit of 60 minutes. The games will be carried on Chess Live and there is a cash prize being offered in a winner-take-all battle. Stay tuned for more details!