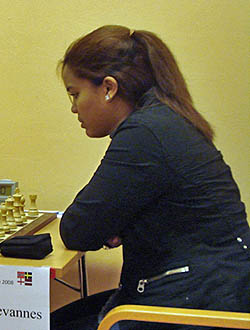 WFM Sabrina Chevannes has come a long way from the cute British school champion we knew years ago. Of Jamaican and Chinese/Malay descent, young “Sabz” blazed the trails in youth chess for many years. The medical student is now competing with the British Women’s team. Last year, she represented England in the Four Nations Challenge (pictured right).

She recently competed in the 2009 European Team Championship in a reserve capacity scoring 2.5/5. Chevannes still competes in 4NCL and London leagues in England and juggles her studies with her coaching activities. Following the footsteps of her two older brothers, she is scheduled to finish medical college in 2011, we hope to see her at the Olympiad in 2010.