There was an interesting (albeit erroneous) document circulating on the Kenyan Chess Forum that was highlighted here yesterday. I removed the story after GM Amon Simutowe stated that it was simply one of many data entry errors in Libya. The report illustrated a game from the 2009 African Championships between Simutowe (Zambia) and IM Khaled Abdel-Razik (Egypt).

In the game, there came the following position: 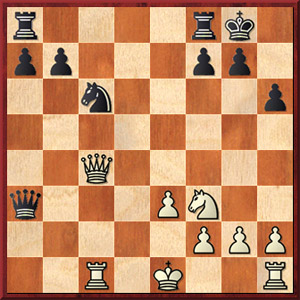 The Zambian GM was a pawn down and a black queenside steamroller was looming. Thirty moves later, black had begun tightening his grip and got to the following position: 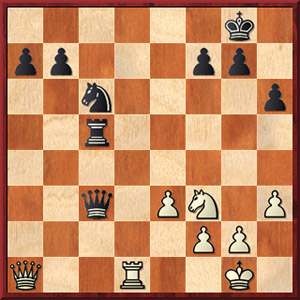 The Kenyan report then gave a strange occurrence. The official database had the move 48.Qxa7?? and of course this merely hangs the queen to 48…Nxa7. The Kenyan report repeated the data entry mistake but came up with a fascinating explanation after black’s 48…Qc2??:

Grabbing pieces prematurely is a common occurrence in time pressure, but this did not occur. In fact Simutowe played 48.Qa4 and the game continued without any incident. However, the question remains… “would black have to move the queen in the above situation?”

The FIDE rulebook makes no mention of this, but general “touch move” rules state that a player must wait until his opponent completes his move by quitting the piece and pressing the clock before attempting to make a move. Imagine the controversy if this had actually happened in a real tournament… and black had a rook on a8!! 😕

(Note: If there are any arbiters out there, please shed some light on this interesting topic.)