On June 25th of the year 2009, Michael Joseph Jackson departed life in Los Angeles, California… the king is dead. In chess the word is “checkmate,” but of course Jackson lead a life that will live longer than his physical life making him in effect immortal. William James once said, “The great use of life is to spend it for something that will outlast it.” 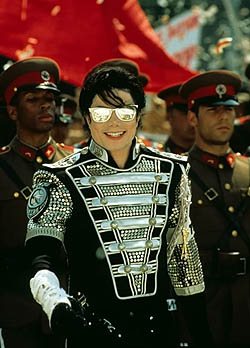 I watched Jackson’s entire career unfold and was shocked at the loss, but not completely surprised by his death. I didn’t expect to see him in old age, but God is the best knower. Since his death, I have listened to so much of his music (from all eras) and watched many videos and reflected on what it meant.

For me, the uniqueness in Jackson’s stage persona was this… he was in complete control and he had the resolve of a four-star general on a battlefield. He was relentless in his pursuit of perfection and determination to achieve an end. Perhaps he characterized this in the outfits he wore often featuring a military motif complete with epaulets, medals and patches. His famous single sequinned glove was added for emphasis. The glove seemed to be symbolic of a powerful man who can make magical things happen with one gesture.

Perhaps his penchant for militarism was instrumental in his appreciation for chess… commanding of forces. He certainly seem to revel in leading his troupe and commanding the precision and perfection of the complicated dance movements. He was always thinking ahead of other creative minds in his choreography and was famous for practicing hours on single dance moves… head tips, spins, glides, popping and of course, the famous moonwalk. Every move, no matter how small, seemed to have a purpose or an exclamation point.

When studying Michael Jackson, there are so many ironies such as his meek demeanor in personal life. Meek, but forceful in his lyrics and his intimidating stage presence in concert. He compensated for the vulnerabilities in his personal life through the avenue of music… that was the stage where he ruled. He ruled the world in this sphere.

If a chess player can look at Jackson’s life and learn anything, they would learn that one has to stay determined despite the odds and detractors… work tirelessly and strive for perfection. Muhammad Ali, Michael Jordan, Garry Kasparov and Bobby Fischer all had these traits in common with Jackson and all would be considered amongst the greatest of all time. The “King of Pop” indeed taught us a lesson.