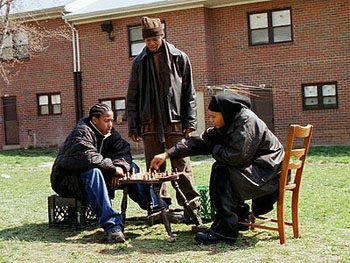 Back in 2002, there was a TV series called, “The Wire.” The show ran five seasons and was considered ground-breaking. It was about the trials and tribulations of living life in the inner city of Baltimore, Maryland. The backdrop is a housing project, a common fixture in inner cities where Blacks live. They could have chosen any city in America, but it is fitting that Baltimore since is one of the hotbeds of street chess. Directors of this scene certainly had a lot of real life examples.

Chessvibes had an interesting piece about a segment in the premier season. The video show D’Angelo teaches two drug dealers (Wallace and Bodie) about the game of chess. The analogies he used to teach chess are based on drug dealing. He certainly captures their interest in a compelling and raw fashion. There are several chilling lines, but his explanation of the difficulty of a pawn promoting to a queen

“Pawns man…. in the game… they get capped quick. They be out the game early.”

“Unless they some smart a$$ pawns.”

The idea of a pawn (street solider/seller) avoiding death and promoting to the most powerful force in “the game” was clear. These young men learning chess for the first time understood the idea quite well. There are so many metaphors and analogies used in chess, but this is perhaps an original scene. The movie “Fresh” had similar themes, but it featured a street hustler showing a young prodigy how to relate chess to life.