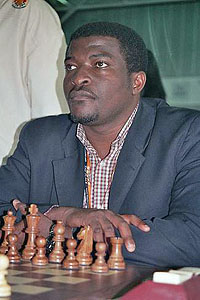 Newly-titled Candidate Master (CM) Charles Eichab cemented his status as Namibia’s King of Blitz when he clinched his third consecutive Independence Blitz Chess Tournament win on Saturday at the UN Plaza in Katutura. Eichab scored 13 out of 14, drawing only against fellow CM Otto Nakapunda and National Junior Champion Goodwill Khoa.

Following his triumph in the inaugural tournament in 2006, Nakapunda has now finished runner-up for the third year running. Khoa took bronze.

The top three players in each category received certificates. A total 231 games were played, a clear indication of the tournament’s popularity. In his acceptance speech, Eichab thanked NAMSPORTS for sponsoring the event, thereby contributing towards the development of chess in the country.