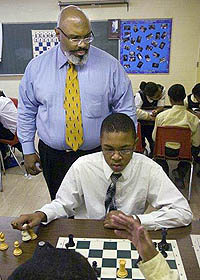 Kevin Fite has dedicated himself to the betterment of society in greater Detroit and has been doing so for decades. The level of commitment needed for this task is nothing short of a gargantuan effort and Fite has done just that. In a recent article in Hometown Life, Fite’s school Cornerstone was shown during a club meeting.

Cornerstone, a Detroit area private school, recently competed in the junior high state championship and brought home five gold medals, six silver and one bronze. The goal this year is to attend the Supernationals in Nashville, Tenn., April 1-6. Fite said he hopes to take 60-70 Cornerstone students to the event that draws 5,000 to 6,000 students from throughout the country.

Fite told The Chess Drum earlier this evening he was hosting a 50-board simultaneous exhibition by International Master Benjamin Finegold. Last year, he hosted National Master Kayin Barclay. These young chess players are well-behaved and look the part. With the majority of the players in uniforms or shirt and tie, they seem to be on a mission. 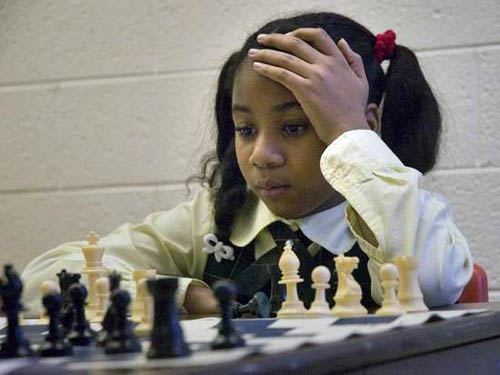 Brenae Smith pondering her next move. Photo by Bill Bresler.

Fite discussed the SuperNationals held April 1st-6th in Nashville, Tennessee where more than 5,000 players from kindergarten to 12th grade with face off for the national crown and possible college scholarships. Cornerstone players hope to be in the number! According to the article, Fite hopes to take 60-70 players. Wow!

The Drum goes to Qatar!