Vladimir Kramnik came roaring back with a convincing victory over Viswanathan Anand in an interesting Nimzo-Indian. All pundits were speculating that Anand could close the deal with a draw, but the game entered a sharp middlegame where Anand went astray and his position collapsed in only a few moves. 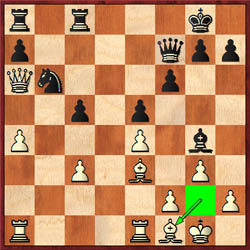 It appeared that Anand had a comfortable opening in this well-tested line, but his position begin to unravel after 22…Bg4. The idea was on 23.Bxc5? Nc4 with idea of …Nd2 and …Nf3+ (or Bf3). Kramnik’s 23.Qa6! had a subtle quality… stifle the queenside and dislodge the knight after a4-a5. At this point, Chess.FM commentator GM Gregory Kaidanov had begun giving Kramnik’s position a positive assessment.

This was said to be a good win for Kramnik, good for sponsorship, good for marketing and even good for Anand! However, if this game is indicative of a pattern of deteriorating play by Anand, then it is certainly not a good trend. Anand will have two chances to get a draw to clinch the crown.

One wonders if anything less than a win would not be a convincing win since many will say in a longer match Kramnik would have won. Perhaps he will go out with a dashing win. If he loses the next game, it will raise a lot of questions. Kramnik in a good mood after win. Photo by Frederic Friedel (Chessbase).