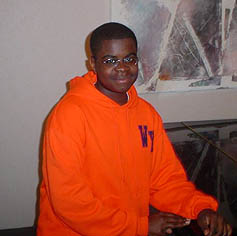 Chicago standout Kayin Barclay tied for first in the Park Forest Open over the weekend. This is perhaps his most significant win in an open tournament as he held co-champion Mesgen Amanov (2390) and Carl Boor (2300) to draws. The 17-year old senior will be competing in the National High School Championships this weekend in Atlanta. Barclay (now unofficially at 2148), is one of the brightest young talents in the African Diaspora and is looking to end his high school career on a high note.