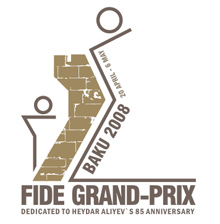 There is finally a top-level tournament that has an interesting collection of players. The first FIDE Grand Prix tournament will kick off in Azerbaijan with a very diverse field. Professional chess becomes a bit routine when you get the same permutation of players like Anand, Kramnik, Topalov, Morozevich, Svidler (and a couple of other players) in every tournament. This one has some of those common names (Svidler), but the games should be very interesting.

Another nice feature of this tournament is the “no draw offer” rule.

Draws: Players will not be allowed to offer draws directly to their opponents. Any draw claim will be permitted only through the Chief Arbiter in the following cases:

The Chief Arbiter may consult with the Technical Adviser before accepting any claim by players for a draw. The Technical Adviser must be a Grandmaster, rated at least 2500, who has held the title of Grandmaster for at least ten years and is an active player as defined by the rating system. The Chief Arbiter is the only authority who can acknowledge the final result of the game in these cases.

Needs some more regional diversity! Would like to see some players in Latin America, Middle East, Asia, Africa (!) However these regions have to handle their business! 8)