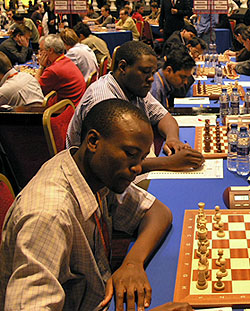 Steven and Moses Kawuma
at the 2004 Chess Olympiad in Mallorca, Spain.

Winning a spot on the Olympiad team is a high honor and it provides a player to (1) represent their nation (2) travel internationally and (3) play strong competition. The Chess Drum has covered two Olympiad tournaments and it would be safe to say that there is no other tournament like it! The next Olympiad tournament will be in Dresden, Germany.

The last three Olympiad have been in Europe where the euro makes sending a team difficult. This issue came up in one of the 2004 FIDE General Assembly meetings when developing federations complained… to no avail. This was the same time that they forgot to put chairs in the hall for African federations so they sat in the back.

Uganda and many other federations will struggle to find funding to meet the expense. Hopefully there are greater considerations in the future. Nevertheless, Uganda’s team is set and there will be some familiar faces. Mazune reports from the New Vision newspaper:

EAST African champion Hassan Mulambe suffered a last round defeat to Shadrack Kantinti to miss out on a slot in Uganda’s team to World Chess Olympiad.

The world’s premier chess event is due in Dresden, Germany next year.

Kantinti took his tally to nine points to top the qualifiers in Kampala.

Another seasoned player Grace Nsubuga outwitted Moses Kawuma in the closing round to snatch second position, one point behind Kantinti.

UK based FIDE Master Stephen Kawuma will complete the squad.

Uganda Chess Federation granted Kawuma a place in the team basing on his current form.

What's next in Black Chess?