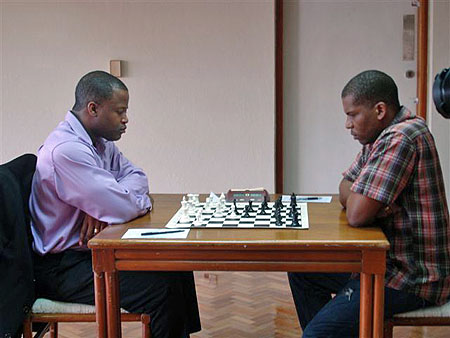 GM Maurice Ashley is certainly an icon in Jamaica. His story is well-known and when he was invited back to his native country, excitement was high. In addition, Jamaica’s Chess Federation President was releasing a new book title, Excitement Galore: Chess in all its Glory. Several dignitaries were on hand to witness this historic occassion and the event was widely-covered.

The excitement hit a fever pitch in the Fred Cameron Open when GM Ashley had waltzed through the first five rounds unscathed on 5-0. This included a thrilling victory over FM Philip Corbin of Barbados, also known as the “Caribbean Tal.” Ashley would face National Master Jomo Pitterson, who is arguably the hottest player on the Jamaican scene at this moment. The game was indeed thrilling as Ashley played an anti-Sveshnikov line and the game delved into a complicated struggle.

Pitterson’s two bishops neutralized Ashley’s attacking chances on the kingside and he finished the game with a final blow. The audience erupted into applause and Ashley gracefully accepted his defeat as being a breakthrough for Jamaican chess.