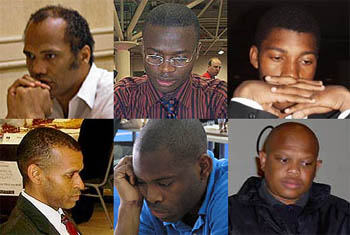 After Emory Tate’s near-miss of a GM norm in Curaçao and with Amon Simutowe current challenges to earn his last norm, I thought, “What could be done to help our finest players?” There is no question in my mind that if Tate, Simutowe, IM Stephen Muhammad (USA) and FM William Morrison (USA) were provided with opportunities, they would no doubt become (or already be) Grandmasters. GM-elect Pontus Carlsson of Sweden found a formula and benefited from his favorable proximity to strong tournaments. 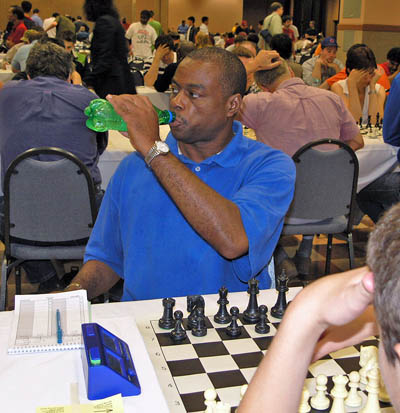 When I interviewed Morrison last month at the World Open, I asked him about norms and he said, “Norms are so hard to get. … Playing in a tournament trying to get a norm is almost like playing the lottery.”  He no doubt was referring to the American Swiss system which has a tendency to leave a great deal to chance. Players in Africa and the Caribbean, who can earn the full IM title by scoring 6/9 in zonal events, may not appreciate the hardship to get a single norm in America. I often get requests from African players to come to America to play competitive chess.

Simutowe has been in the U.S. for four years and I’m sure he will attest to the difficulty of earning norms in the Swiss format. There are not many closed tournaments in the U.S. and the open tournaments where norms are subject to all types of conditions (e.g., number of rounds, average rating category, performance rating) make norms difficult to earn… indeed.

Players like IM Watu Kobese (South Africa), IM Robert Gwaze (Zimbabwe), IM Kenny Solomon (South Africa), Shane Matthews (Jamaica) and Stanley Chumfwa (Zambia) are other veteran players who strike me as players of immense potential. Kobese has been on the international scene for more than a decade and has qualified twice for the World Championship cycle, but apart from his stint in Germany, he has garnered little support for his GM quest. Matthews, a Jamaican chess legend, did some chess study in Russia, but for the most part, he has played primarily in the Olympiad tournaments and in the Caribbean region.

Norms are so hard to get. … Playing in a tournament trying to get a norm is almost like playing the lottery.
~FM William Morrison, holder of two IM norms~

This means one of two things: (1) norm tournaments have to be organized to provide more opportunities and (2) raising of funds for players to travel abroad. In a word… sponsorship. How does a player attract sponsorship?

I believe each player who desires to earn a higher FIDE title (IM or GM) should draft a professional chess résumé (including a biography, key games, results and news articles), get business cards and market themselves to corporate sponsors and tournament organizers. If he does not feel comfortable, he can enlist the help of an “agent,” (or someone he trusts) who can negotiate terms and conditions. Professionals must carry themselves as professionals!

There needs to be more tournaments like the Wilbert Paige Memorial. That was a historic and exciting tournament and will live forever. Those who were present will remember the magic. The question remains finding people who are willing to make the sacrifice to help organize these types of tournaments without any selfish motives.

Any Ideas or Suggestions?

Is Chess a Sport?