After a bit of rankling with the organization of the U.S. Championship, the 2007 version will kick off today in Stillwater, Oklahoma with a trimmed 36-player field. This is yet another format from the previous formats which feature both separate and combined fields of up to 64 players. 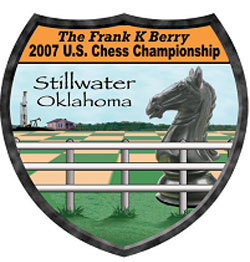 The America Foundation for Chess (AF4C) decided to withdraw its role as the chief organizer after a bitter dispute between the AF4C and the United States Chess Federation (USCF). The foundation has not withdrawn total support. Erik Andersen, the foundation’s President,  has presented the USCF with a $25,000 gift toward the prize fund. The details of the high-octane dispute can be found on Mig’s Daily Dirt.

According to USCF online, the USCF Executive Board approved a bid by U.S. Tournament Director named Frank Berry to hold the championship. The 9-round Swiss format has a total prize fund of $65,000 and will bear Berry’s name. Participating in the event will be 18 GMs (minus Joel Benjamin and Larry Christiansen), nine IMs, five FMs and three women (including IM Irina Krush). National Master Michael Aigner and National Expert Tom Braunlich round out the field and will make their first  appearances.  With such a change in the format, the tournament will scramble to find intriguing stories, but there will hopefully be exciting chess played.

All eyes will be on scholastic sensation 12-year old FM Ray Robson who has been improving at a dramatic pace. Hikaru Nakamura,  who has taken a sabbatical from Dickinson College, will be the top seed and will be looking to regain the title after a disappointing 2006 finish.