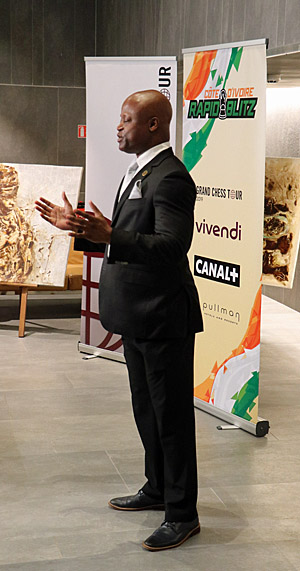 Côte d’Ivoire was Maurice Ashley’s 7th African country, all in a relatively short period of time. This would be the first visit to a Francophone African country and the Jamaican-born GM would put his French skills to use. Ashley took up French in high school with a desire to travel to France where his father is an artist. His fluency was good enough to land coaching positions with the Ivorian and Madagascar Olympiad teams in 2016 and 2018, respectively.

After being a guest at the 4.4 subzonal tournament in Ghana, Ashley headed to Abidjan for the highly-anticipated Grand Chess Tour. It would feature World Champion Magnus Carlsen and nine other top-level players. The brevity of the tournament did not deprive fans of immense excitement, and of course Ashley was up to the task of calling the games. Carlsen was in form once again as he won his 5th tournament in a row reasserting the dominance that had eluded him in 2018. This victory serves to sent a message to those who may have thought he was losing his edge at age 28.

Ashley interviewed Carlsen who noted the enthusiasm and stated that there was a bright future in West Africa. After Ashley got with all his interviewing for the tournament, he sat down with The Chess Drum’s Daaim Shabazz to give his impressions of the event, its impact on the continent and initiatives to keep the momentum going in Africa. This interview took place after the Grand Chess Tour Rapid & Blitz event at the Pullman Hotel in Abidjan, Côte d’Ivoire.