The evening of Monday, March 4, 2019 saw history being created in St. Vincent & The Grenadines with the launch of the country’s Chess Federation at the Music Centre in Kingstown, the nation’s capital. The newly established “St. Vincent & The Grenadines Chess Federation” (“SVGCF”) was greeted with much enthusiasm and excitement by the approximately thirty persons present, including students.

This significant event in the country’s life was spearheaded by two Vice-Presidents of the World Chess Federation (“FIDE”) – celebrated English International Chess Grandmaster Nigel Short and Ian G. Wilkinson QC, also the President of the Jamaica Chess Federation, who visited the island between March 2 and 5. The formal launch was chaired by Wilkinson.

Prior to the launch of the SVGCF both men met with important stakeholders including Dr. The Hon. Ralph Gonsalves the country’s Prime Minister; the Hon. Cecil McKie, Minister of Tourism, Sports and Culture; the Hon. St. Clair Jimmy Prince, Minister of Education; and Members of Parliament Godwin Friday, the Leader of the Opposition, and Major St. Clair Leacock.

On behalf of FIDE, Wilkinson presents a copy of his book “Excitement Galore: Chess In All Its Glory” to SVG Prime Minister, Dr. The Honorable Ralph Gonsalves. Also present (from left) are the Honorable St. Clair Jimmy Prince, Minister of Education; the Honorable Cecil McKie, Minister of Tourism, Sports and Culture; Grandmaster Nigel Short and Senator Israel Bruce, Attorney-at-Law.

Both Short and Wilkinson also conducted “simultaneous exhibitions” which involve playing many persons on different chess boards at the same time. On Sunday March 3, Short (1993 World Chess Championship Finalist and three-time Commonwealth Chess Champion) took on seven players and won all the games.

On Monday March 4 after the launch of the SVGCF, Wilkinson (a two-time Jamaica Veterans’ Chess Champion) faced six players, won five games and drew with a high court judge. 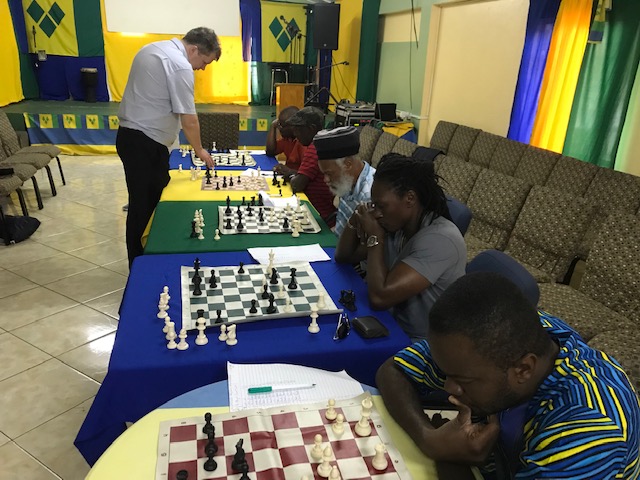 The SVGCF has established a seven-man steering committee led by Senator Israel Bruce, Attorney-at-Law, who was instrumental in facilitating the visit of the FIDE officials and providing logistical support. This Committee will finalize all the relevant arrangements by March 31, 2019 so that the SVGCF can apply for membership in FIDE.

Bearing in mind the many benefits of Chess (including making students better, developing self-esteem, exercising and developing the brain/mind, teaching responsibility for one’s actions), the SVGCF has plans to promote Chess throughout the length and breadth of the country; introduce a Chess-In-Schools programme; organize national championships; and participate in international events such as the World Chess Olympiad.