The first game of the 2018 World Championship match between defending World Champion Magnus Carlsen and Fabiano Caruana was officially opening by FIDE President Arkady Dvorkovich. With a massive audience tuning in on various Internet platforms the match has been highly anticipated for months and now would come the opening salvo. What would be the opening? How would Caruana handle his first match game? Would Carlsen opt for the Berlin or Petroff. All these questions were offered and when the clock button was pushed, we got our first surprise. 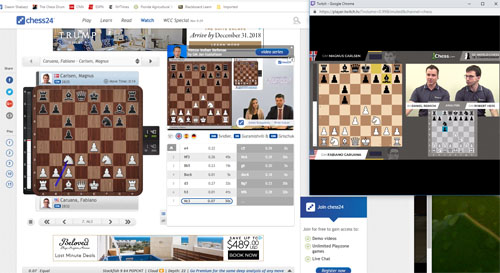 The game has begun and it is a Sicilian Rossolimo!

Caruana, a predominantly e4-player opened in kind and Carlsen countered with the Sicilian! That was the first surprise. Would it be a Najdorf or Sveshnikov? These are two hyper-complicated variations that have been tested at the highest levels. After 1…c5 2.Nf3 Nc6, the American played 3.Bb5, the Rossolimo Variation. The move sidesteps the massive complications and simply gets into more common positions motifs, but provides enough imbalance to play for advantages.

However, Caruana begin to drift as Carlsen began to position his pieces to bind the dark squares. When white broke with 11.f4, black was completely prepared and clamped further on the dark squares with 14…g5!? Fast forward to 22…Ne6 after black sacrificed a pawn in exchange for blowing white’s king cover. Things were complicated by Caruana’s dwindling time.

After things clarified a bit on the kingside, Caruana needed to find a cover for his bare king, so he played 26.Rg2 (26.Rxf4!? was interesting). He ultimately plugged up the open g-file with his knight and his king scurried across the board out of the line of fire. Despite this maneuver, the black queen burrowed into white position.

“I was lucky to survive.”
~Fabiano Caruana

Former World Champion Garry Kasparov was on the live broadcast and studied the position with keen interest. He was highly critical of Carlsen’s 36…h4. After white’s 38.c3, he looked and offered gem… Rg3! He rattled off a few ideas to the stunned panel Jennifer Shahade and Yasser Seirawan. Kasparov asked Maurice Ashley to check the engine. Ashley said, “Yep. The engine likes your move… a lot.”

Indeed. The engines were screaming for 38…Rg3 after which white’s positions collapses. It was the first of many errors by Carlsen who still had chances to claim a winning advantage, but was bitten by the time pressure bug. After the queens came off, it was hard to see Carlsen winnning the position. After 55…Rxe7, Carlsen has a 3:2 pawn advantage in a rook ending, but white had established an impenetrable fortress. Carlsen played on another 60 moves before they shook hands and agreed to a draw.

Very intense game showing that nerves played a part in both players not playing up to par. It will take a few games, but with the short match, there is little room for error.

The global chess community has been looking forward to the match between Magnus Carlsen and Fabiano Caruana. Two supremely talented players are fighting for the world chess championship crown. Their chess understanding rival the strongest chess computer programs. Both players are roughly on an even playing field in terms of age and Elo rating. Carlsen is 27 and Caruana is 26. Carlsen’s November Elo rating is 2835 compared to Caruana’s 2832.

It seems Carlsen is the slight favorite. He has achieved more thus far and has a better individual score against Caruana. I think the significant advantage Carlsen holds over Caruana is his experience in world chess championship matches. This is Carlsen’s fourth compared to Caruana’s first. But I think Carlsen will generally face more pressure than Caruana. Caruana’s energy and excitement at the possibility of dethroning Carlsen may work to his advantage.