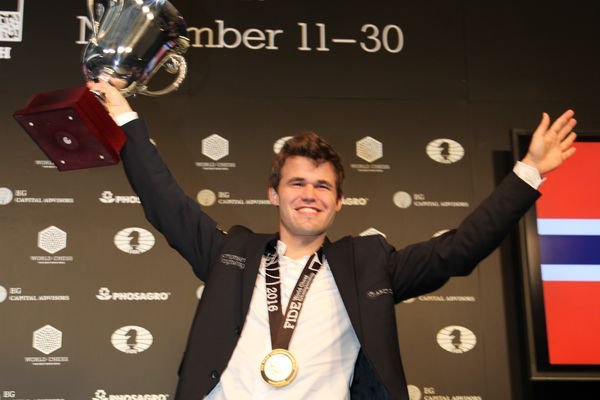 After beating Karjakin in Game #10, Magnus Carlsen said that he was able to “break” Sergey Karjakin. It was a pivotal moment of the match as the champion decided that with new life, he would head for the tiebreaks. “The idea was to make Sergey prepare hard for the twelfth game, while I was already looking at the rapid tiebreak.”

Would Karjakin dethrone Carlsen? Tiebreaks could be a tricky affair. Both players limped into the the tiebreaks bloodied, bruised and exhausted. So what happened? The tiebreak turned out to be a brutal flogging of Karjakin and ended with a picturesque mate for the ages. With his lucky NBA socks on, Carlsen finished the deciding game with a flourish. GM Yasser Seirawan probably would have exclaimed something about “gold coins” being thrown on the board.

50.Qh6+ is the way to wrap up the best possible birthday gift. https://t.co/FBXx8Jg2nd #CarlsenKarjakin pic.twitter.com/G0mwGeotDW

Carlsen eased into the tiebreaks after an uninspiring Game #12. A minor controversy erupted as disgruntled fans and commentators scoffed at the 35-minute game. This strategy worked like a charm and Carlsen was clearly dominant during the tiebreaks. Karjakin admitted after the match that he wasn’t able to use his preparation, a major failure for his team. This was the subject of several tweets…

One of the most impressive feat of this match: Karjakin and his super team failed to get a single opening advantage #CarlsenKarjakin

It is certainly true that Carlsen seemed better prepared despite the pre-match concerns about the Russian colossus. So… lets rewind and look at the four tiebreak games. A quick synopsis shows that Karjakin was not ready to switch gears and it is doubtful that the match preparation included this transition. Karjakin admitted this difficulty.

This game was a “feeling out” game of sorts. In a short match you don’t want to do anything to drastic in the first. It is a way for each player to adapt to the new situation. This game while it had its moments of tension, had little in the way of tangible imbalances. Karjakin was very unambitious throughout the match and in his first white game got no advantage. The game started slow and after rapid-fire exchanges, the game petered out to a draw.

Not much in the discussion here. However, the next game would feature one of the most sensational defensive efforts in modern chess history. The ending will be included in instructional endings for many years to come. It was after this game that many thought would give Karjakin the motivation he needed to push for more with the white in Game #3. Nevertheless, it should be noted that Karjakin’s defence was only made necessary after getting a losing position.

In this game, a Italian Game broke out. It occurred in Game #5 with Carlsen’s bughouse-like 14.Bxf7+ drawing early praise. Actually he was fortunate not to lose if Karjakin had played 43…Rh8! The Russian opted for 43…Bd5 and Carlsen was able to find counterplay after returning the pawn. This game took a different path. The champion built up pressure and then 23…cxb5 changed the game after 24.Qxe4! Qxc1 25.Qxd5. Two bishops versus a rook. Carlsen slowly tightened the noose after the queens were swapped. The ending was epic!

Wow! There was so many superlatives on Karjakin’s defensive effort. Adding to his title of “Minister of Defense” were a few gems.

If you ask me Karjakin has just become World Chess Defense Champion. #CarlsenKarjakin

It turns out that Carlsen missed several winning continuations, but of course he is not playing a computer with a seven-piece Tablebase. Thus, he was able to survive by sacrificing one pawn, another pawn, his rook and then a third pawn. Exhilarating game! With Carlsen not being able to win, many feared he was be upset and press too hard to win the next game. The championship was riding on the next two games and Karjakin would have white in Game #3.

Karjakin had shown nothing with white, won his only game with black in Game #8 and was near winning with black in Game #5. In this game, there was another Ruy Lopez (seen 11/16 times in the match). Karjakin had nothing and Carlsen seized the initiative with a kingside attack and nice shot with 30…e4! Black seized control only a few moves thereafter.

White could’ve saved the game with some care. Some beautiful lines are given by Navara.

Karjakin’s defense let him down with the final blunder of 38.Rxc7?? effectively ending the match… or not? Carlsen was visibly excited and gave a Michael Jordan/Tiger Woods fist pump after Karjakin resigned. Russia’s Minister of Defense looked demoralized, but had one more bullet left. What would he trot out? Not a Berlin of course. It is amazing that 1.e4 make a comeback with 1.d4 only appearing three times. So…

We have a Sicilian for 1st time #CarlsenKarjakin due to MUST WIN scenario for Karjakin. He has no choice but to go for broke!

Finally, we are going to get hand-to-hand combat and not fighting from a distance as is often the case in a Ruy Lopez. However, there was an interesting Tweet that said if Sicilian was good enough to play for a win, then why not use it earlier? Good question. It shows that Karjakin was given a match strategy and he followed it to a tee. That is, until he fell behind.

“Everybody has a plan until they get punched in the mouth.”
~Mike Tyson

Tyson said it best! Perhaps, Carlsen’s win caused a desperate act and the Sicilian was as good a weapon as any… better than most. The game went into a Maroczy Bind setup with black not getting the typical Najdorf or solid hedgehog. He got a hybrid setup which didn’t work well in the end. GM Maurice Ashley didn’t like 19…h5 but it seemed to be black’s best practical decision… and a move often seen to loosen white’s e4-f3-g2 cover. However, black’s pieces were simply not positioned to take advantage of white’s fearless 29.gxh4 move. White’s king was exposed, but white had too many resources. In fact, the 50.Qh6+!! parting shot was one for the ages (Note: GM Judit Polgar announced before Rc8+). To end the game with such a move is like making a game winning shot in the final game to win a championship.

So Magnus Carlsen has twice defended his title, but rivals are salivating at a chance at wresting the crown from what seems like a vulnerable champion. Navara’s notion that the “Norwegian’s throne isn’t unshakable” is correct. It demonstrated Carlsen’s character… more like Achilles than Thor in this match. There is a chink in the armour, but of course difficult to pierce. This may be motivation for the 26-year old “Mozart of Chess.”

This match was closer than many thought. We will see what happens in two years time. Many changes could occur and new faces can emerge in that time. For the time being, Carlsen will be the champion and he will not duck competition. It is with a sense of satisfaction that he won a closely contested match and it will do him good in future matches. For now it appears that Carlsen got the best present on his 26th birthday. Double congratulations!

After #worldchess2016, hanging out in St. Louis!