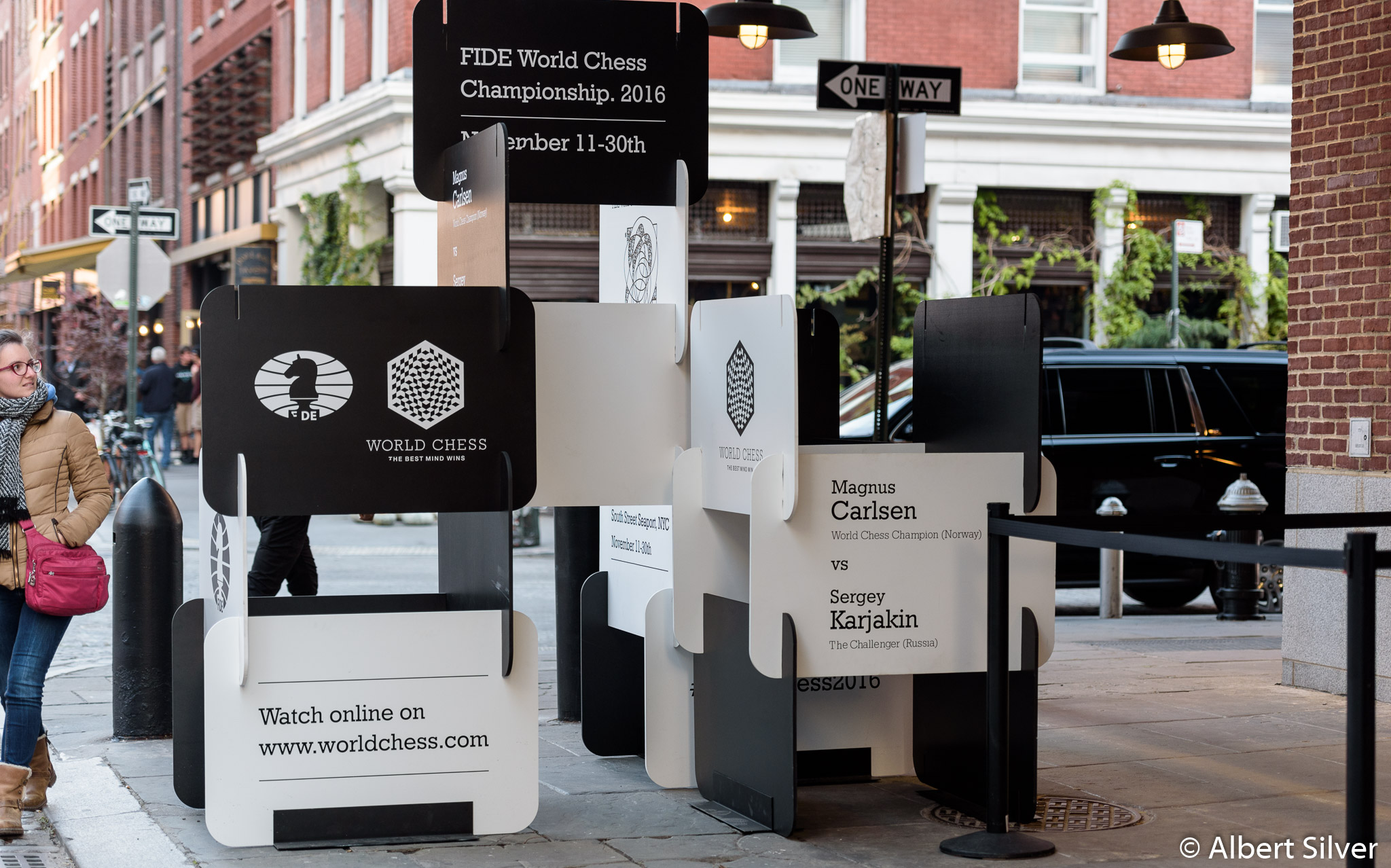 WCC signposts outside of Fulton Market.
Photo by Albert Silver

The match continued today with a regularity that only chess players would recognized. The initial pre-tournament excitement has worn off only to be replaced by the excitement of the twists and turns of the match. What would it be today? Sergey Karjakin was playing white, but we knew the game wouldn’t go 1.d4 Nf6 2.Bg5… one time is enough for one championship match.

As the game progressed out of the opening, Susan Polgar mentioned that today was “National Pizza Day” so maybe they should play a Sicilian. It turns out the game went 1.e4 e5 so no Sicilian, but after 2.Nf3 Nc6 they could’ve still played an Italian Game with 3.Bc4. So much for the sideline jokes… 3.Bb5 was played. Tension was thick and throngs of spectators showed up. While enthusiasm was high, fans seemed to be unable to get an optimal view. 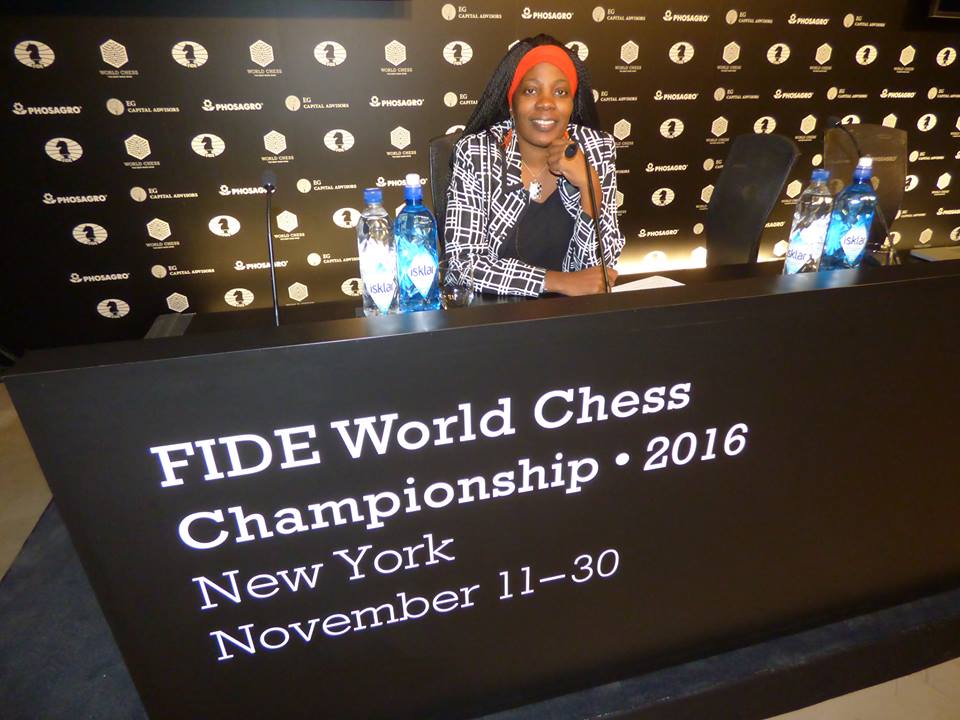 What occurred in the game was the Ruy Lopez, but after 3…a6 there would be no Berlin! Carlsen had played the solid defense regularly in the two matches against Viswanathan Anand (eight times) and thwarted any initiative by white. Was this merely a psychological ploy? One of the guests on the telecast was Bobby Fischer biographer Frank Brady who noted the similarities between the 1972 and the Carlsen-Karjakin. He recounted a number of stories including Fischer’s quip, “I don’t believe in psychology. I only believe in good moves.” Hopefully we will see good moves during the match.

A key moment appeared in the game when white played 6.d3 eschewing possibilities of mainlines in the Marshall Gambit, Breyer, Zaitsev, and Chigorin. Then later Karjakin released the tension with 18.dxe5. Many felt that this move was an unspoken draw offer. They ventured into a “queenless middlegame” but by move 25, Karjakin had applied pressure with 25.Ra6. After 25…Rc8 26.b4 Re6?! Ruslan Ponomariov had this to say, “With 26… c5, Carlsen could have posed more practical problems 27. Nxb5 cxb4 28. Nd6 Re6 29. Nxc8 Rxa6 gives White something to think about.” After 27.Rb1 c5 the game petered out to a draw on move 33. The plot thickens!

Still image from the 360-degree view. You can get a total view of the room. Nice, but not much to see other than players and arbiter. pic.twitter.com/mjClouS5CB

As far as the venue, it was a successful, but the there is still the issue of how to manage the spectators. There was the aforementioned crowds, but also the lack of space for the press area. Dennis McGrath of the Minneapolis Star Tribune reported, “Chess fans from far and wide flooded into the sold-out World Chess Championship match in New York City Saturday and they were surprised — and many were furious — at how little they actually saw of the two grandmasters competing for the title.” (article) ChessBase journalist Albert Silver gave an account of his experience.

Unfortunately, the media room was so packed that not only was I unable find a seat at a table, but there was not even room on the floor. This caused no small amount of consternation, since although there was certainly WiFi in other areas of the venue such as the Café, there are no electric plugs to power a laptop. So where did I work? From the production room with makeup! Needless to say, I was not allowed and was directed to the media area, but I explained my quandary and appealed to them. “look at how small I am! I take up no space!” — laughter and I was made a small room at the makeup table. My warmest thanks to the production team for being such a sport about it.

There are two spectator areas: one for normal visitors, and the other for the VIPs. They both share a space with glass panes that offer views to either side of the playing area. The space for the ‘common’ spectators is a dark black room, standing room only, with a cordon separating the viewers from the glass panes. The panes are also darkened, no doubt in such a way as to not have the players distracted by the spectators, but the side effect is also a seriously reduced visibility making it seem as if one were viewing it with strong sunglasses. As there is also a healthy distance between the panes and the playing table, it is not unfair to say it is much less than idea, especially with no chairs of any kind. (article)

Rest day before Game Three on Monday. Carlsen was asked what he planned to do for the rest day and he mentioned that it was a bit early for rest and that he really wanted to play tomorrow. Karjakin on the other hand, preferred the rest day. It is probably more beneficial for the Russian as he continues to acclimatize to the atmosphere. However, it is quite strange that on the weekend there is a rest day for the players.

It's a weekend and the world chess championship schedules a rest day. I don't get that at all.

We can assess this with a “?” or maybe a “!” Good move because it will give the AGON organizers a chance to recover. To pay $75 for a ticket and not be able to watch the action in a theater is a major shortcoming in a city that is more than equipped to handle this. It is most likely that these organizational mistakes will be cleaned up, but it would’ve been good to capitalize on the weekend for ticket revenue.