After two rather humdrum affairs in Carlsen-Karjakin match, the third round of the World Championship match had about as many twists and turns as … you guessed it … a roller coaster. While the cliche was a bit overused in social media, it was certain an appropriate analogy after many had groaned after the game ventured into the Berlin Defense.

With the Berlin’s reputation of being nearly impregnable, Carlsen deviated from 5.d4 Nd6 6.Bxc6 dxc6 7.dxe5 Nf5 8.Qxd8+ Kxd8 (avoiding volumes of theory) with 5.Re1. Carlsen then played what appeared to be a novelty in 10.Re2!? when in fact the move has been played a couple of times. The idea, pioneered by GM Maxime Vachier-Lagrave, is to trade rooks on the e2-square after …Re8 and or double rooks with Rae1.

Fast forward. While the game appeared to be drawish, dynamic play ensued. There was even GM Denes Boros‘ suggestion of 17.g4!? which evoked a smile from Carlsen. “It’s very nice!” said Carlsen. After a lull in action and the shuffling of pieces the game started to heat up. White played 25.f4! setting up a nice structure that became apparent after 30.Rg1.

The position heatens up after Carlsen's 32.Rg8! Karjakin's position is now "fragile" (@GMJuditPolgar)

In the next ten moves, Karjakin was reduced to defense… and defend he did! However, there was a blunder with 61…Bg5?? which after 62.Rd4! Rd3+ 63.Kg4 gives white winning chances again. In order to stave off a slow death after 67.Re6, Karjakin donated his bishop and went to liquidate all the pawns after 67…Rxh3. 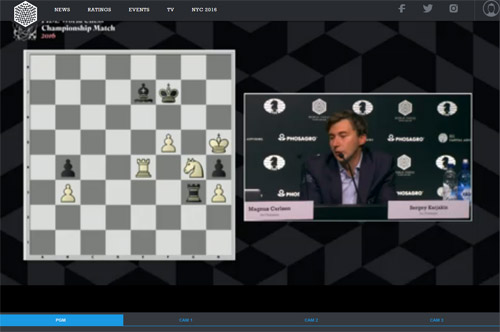 His tenacious defense paid off as Carlsen play 72.Rb7?? (72.Rf7+!) throwing away the win. The game ended with black’s h-pawn getting menacingly close to the queening square and trumping white’s extra piece. They repeated moves and sued for peace. A gut-wrenching, heart-pumping affair!

In the end, Carlsen was very disappointed that he didn’t earn the full point, but Karjakin found many resources and his energy held up. Both GMs Teymour Rajabov and Ruslan Ponomariov had a debate on whether a draw was better for Karjakin or Carlsen.

@Ponomariov It's my personal opinion. Pressure growth for World Champion with every draw, he is clear favorite and he is supposed to win

It goes without saying that Karjakin is relieved to have escaped with a half-point. Carlsen, on the other hand, is most likely frustrated with what he discovered after checking the game. Will Karjakin apply pressure to the disappointed champion? Absolutely!