GM Pontus Carlsson returned to Czech Republic from the U.S. after competing in the Millionaire Open. He stated in an interview that he wanted to support Maurice Ashley vision for chess advancement and had very interesting suggestions. It is unclear if he has the same ideas for the Czech tournaments, but he must certainly enjoy winning them.

Carlsson entered the Pankrác Cup as the 4th seed behind GM Peter Michalík amongst a spattering of titled players. While the Swedish-Colombian national does more coaching, he plays occasionally and is still capable of his signature attacking style. Carlsson got off to a nice start with a snappy win over Miroslav Šmíd which ended in a nice combo.

After scoring wins in his first three matches, Carlsson faced Michalík with the Black pieces and trotted out his beloved pet Dragon. When Michalík spurned a draw by repetition, he was soon routed. 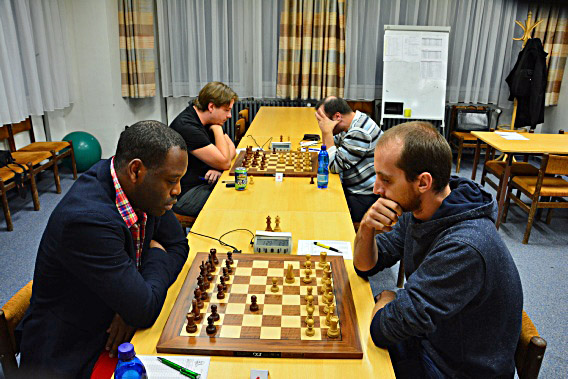 Carlsson about to unleash Dragon against GM Peter Michalík.
Photo courtesy of pansach.cz

With this main competition out of the way Carlsson drew his last three games including the penultimate round in which he had chances in a 4+3 rook ending (same side), but it was drawn after 83 moves. In the last round, Carlsson mentioned that he was much better against FM Svatopluk Svoboda and stated, “When he offered draw, I would not have taken it if it was not for the fact that it gave me clear 1st.” Nevertheless, it was a deserving win for Carlsson as he ended on an undefeated 5.5/7.

Will Chess Championship get lost in Election Aftermath?