Finally… the USA can call themselves Olympic champions in chess for the first time in 40 years! Led by Fabiano Caruana and with a strong supporting cast, the Americans edged out the Ukraine on tiebreaks despite the latter’s stirring 3½-½ win over Slovenia. After the legendary Alexander Beliavsky resigned, Pavel Eljanov broke out in jubilant emotion perhaps thinking that such a result would have secured the gold medal. With the team missing their top player, it was a fantastic result and such a victory would have been deserving. However, the USA pipped the Ukrainians and were one of two undefeated teams in the open section. The other? Not Ukraine, not Russia, but Greece (+4 =6)!!

The day started with fairly safe predictions… the favorite would win on the top three board and snare the medals, but the order of the medals was in doubt. USA was playing their northerly neighbor and despite wonderful relations, Canada wanted to spoil the party. Caruana was simply too strong for Evgeny Bareev who is playing in his first Olympiad for Canada. Hikaru drew comfortably with Anton Kovalyov and Wesley So continued his dominance, by crushing Alexander Lesiege, the former Canadian ace.

A side story surrounds Canada’s fourth Eric Hansen, who is very popular and well-liked in American circles. He has competed in many open tournaments and most recently has handled commentary at major event at the St. Louis Chess Club. So… when Hansen had to replace Maurice Ashley, he had to take over interviewing duties. He was quickly chided for the types of questions he would ask and it soon became an Internet parody. In fact, Caruana wore a shirt to the match poking fun at Hansen’s line of questioning.

Hansen took the joke well, but then was able to beat a very in-form Sam Shankland and serve as spoiler for his board medal quest. The game was an interesting Ruy Lopez and of course white spurned a draw offer and went forward with 22.g4. Shankland went astray, perhaps seeing that his teammates were comfortably ahead. Hansen seized the initiative, planted a knight on e6 and black’s position collapsed quickly. However, after So mopped up Lesiege, the gold was a matter of verification.

World Champion Magnus Carlsen had a creditable tournament leading Norway to their highest position in history… 5th place. He scored 7.5/10 and was satisfied with the team’s performance. However, he made a rather unfortunate and classless comment about the USA’s victory.

@MagnusCarlsen probably need an even better squad to go further though, wonder if Caruana and So are still for sale

The reaction was swift and although it was clearly tongue-in-cheek, it was in poor taste and something that he has mentioned before. The truth is (and apparently unbeknownst to a sizable portion of the chess world), Caruana was born in Miami and raised in Brooklyn and after spending 10 years in Europe, returned to his native country. Although he has dual citizenship, he has never been a permanent resident in Italy.

Perhaps Carlsen’s comment is more of the continued spite of an American victory. Such sentiment is very widespread in Europe and is no doubt a side effect of America’s repugnant foreign policy decisions for the past 50 years. Nevertheless, this team is hard to criticize. Wesley So was the star of the team and now a gold medalist (9/11)… Caruana got a bronze.

For Hikaru (7.5/11) and Shankland (5.5/8), they had decent results as well. Finally, Robson (3/5) who at 21, still has a bright future ahead. There is also a pipeline of talent which includes 2600-rated teen GMs Jeffrey Xiong and Samuel Sevian. This victory will certainly inspire yet another generation of players. Furthermore, the landscape is changing in chess. The USA is now a perennial contender, but in the top 25 you had teams such as India, Turkey, Peru, Iran, Paraguay, Brazil and Cuba. Certainly the balance of power has shifted and the Olympiad is gradually living its motto.

Thanks for a wonderful tournament Baku. See you in Batumi in 2018… inshallah! 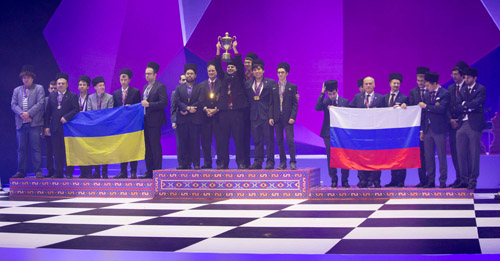 China was heading into the last round needing at least a draw to secure their first gold medal since 2004. The last game to finish was two champions, Hou Yifan and Alexandra Kosteniuk. For Russia, it was not to be. Not only did they fail to defend their title, they failed to medal. For China it was a relief after having earned three consecutive silver medals behind Russia.

During the closing ceremonies in Istanbul, the Chinese women were visibly upset. In Tromso, they were a bit more spirited, but certainly the quest for gold never left their minds. The Chinese team in 2018 may have a decided different look. Perhaps Zhao Xue at 31 is making her last stand and if so, will go out with a gold medal (as Ni Hua did in 2014). The rise to Tan Zhongyi is a very good sign and according to Zhao, there is a lot of talent in the pipeline.

For Poland, it was a triumphant tournament and was their highest placement, a fact readily celebrated in social media. The Ukraine was able to continue their string of success with Anna Muzychuk ensconced on board one next to her sister Mariya and a former world champion on board four! Ukraine, a battle-scarred country, had a good result and won the Gaprindashvili Cup for the federation with the best combined result. To return to Ukraine with silver and bronze is quite a feat and they will be showered with a hero’s welcome in Kiev. 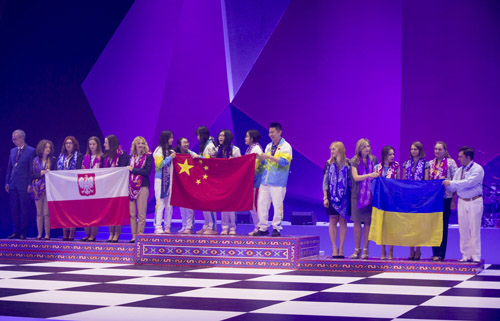 The Anatomy of USA Gold at '16 Chess Olympiad