An epic finale’ is brewing in Moscow at the 2016 Candidates Tournament. Both Sergey Karjakin and Fabiano Caruana are gripped in a tense tie for 1st place and are scheduled to meet in the last round of the tournament. At this point Karjakin has the better tiebreak based on his number of wins, so Caruana will have to win one of the last two encounters.

One day this will be a classic photo.

Caruana has sprinted toward the finish line after underwhelming the first seven rounds with draws. After his key win over compatriot Hikaru Nakamura, he pulled ahead in the field after beating Viswanathan Anand. Karjakin lost brutally to Anand, but rebounded with a win over the hapless Veselin Topalov.

This sets up a very tense showdown where Caruana will face both Russians evoking memories of Bobby Fischer against the Soviets. All the parallels are there: New York, Brooklyn, child prodigy, Russian opposition. Of course, Caruana is a rather mild-mannered personality with tough nerves and a universal style. Equally, Karjakin is a tough competitor who will come without any expense spared to make him successful. He has had an unimpressive second half, but will be more than prepared. Levon Aronian will be a tough prequel to his finale with Caruana.

The possibilities of a Carlsen-Karjakin match vs. Carlsen-Caruana contrast sharply. As mentioned by commentators, Karjakin has been around the elite level for many years, but despite his various sponsorships, has not established an identifiable media brand. He is not particularly visible and his fan base may not be equal to the other top players. However, he is eminently-qualified to compete and the match will be competitive. Whether Madison Avenue will make an investment is another matter.

For Carlsen-Caruana, there would be immediate attention given that it will be in New York, a place Caruana called home for most of his childhood. There are all the connections to Brooklyn-bred Fischer and Caruana’s Italian ancestry will certainly give marketing agencies a lot to work with. In addition, he has much in common with Carlsen with both being telegenic bachelors, epitomizing a mano-mano, gladiator battle. Finally, Caruana has a decent score against Carlsen which would make for great anticipation. 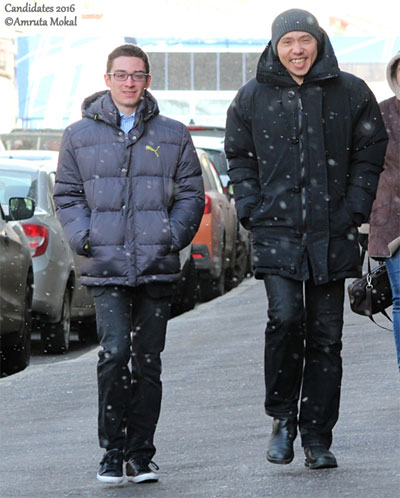 So what will be the outcome of the Candidates? We are all hoping for an ending free of drama and controversy, but there were many critics of the tie-breaking format. Instead of playing a playoff, the winner will be determined by tiebreaks… unless all the tiebreaks still produce a tie. In that case, rapid games are played. There can actually be a five-way tie for first!! One thing that is certain is that chess fans are in for an exciting finale’ and an even more exciting championship in November. Carlsen is certainly watching.