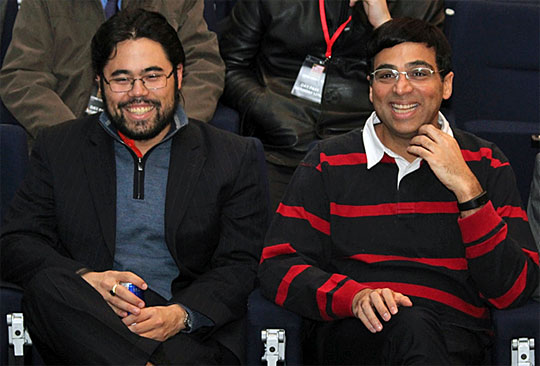 Despite losses last round, bright smiles for two national legends. 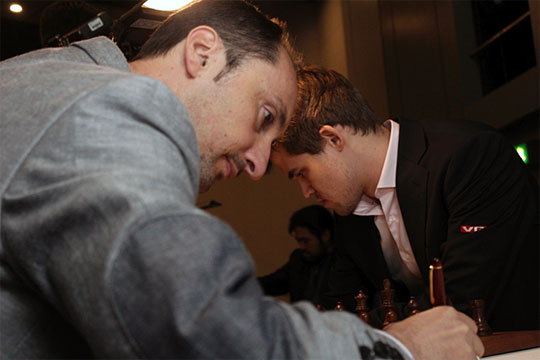 Two players at opposite ends of field,
but still a fierce fight ahead.
Photos by Amruta Mokal.

Some very interesting games in the eight round despite only one decisive game. Front-runner Anish Giri was facing Hikaru Nakamura who was conming off of a tough loss against his nemesis Magnus Carlsen. That game ended in a bitter loss for the American, his 12th loss in classical chess against the World Champion.

There were some interesting struggles notably Caruana-Anand in the Catalan. There was 11.Ng5!? and the interesting 16.Bc1!TN The instructive ending coming out of the resulting middlegame as Anand was racing pawns down the board.

Topalov-Carlsen had a very interesting scenario in that Carlsen tried for 50 moves to try to win a very lifeless ending. There was a unique predicament for Carlsen. He had to capture a pawn or move a pawn to restart the count. However, if he had done either, the game would have dissipated quickly. In the end, he had nothing better than to take the e-pawn to avoid the 50-move rule, but Topalov held easily. 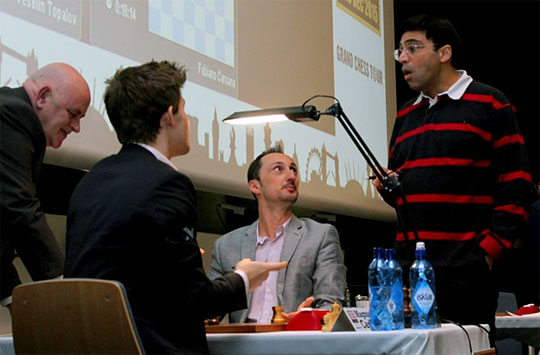 Carlsen explains to Anand why he took the pawn with 84. Nxe5.
If not, the 50-move rule would have been invoked!
Photos by Amruta Mokal.

Grischuk-Aronian was a tense struggle in an English where black employed a hedgehog-type structure. With the d-pawn missing it has a different character, but black executed novel play with 16..Ra7, 18…Qa8 and 22…h5 with raking bishops hitting at the imposing white center. After 32…Nde5 it appeared that Aronian had good play, but overlooked 36.Nh6+! making a draw.

MVL-Adams had a theoretical game going all the way to move 23 before making a new move. After that, the game went only a few more moves before being drawn.