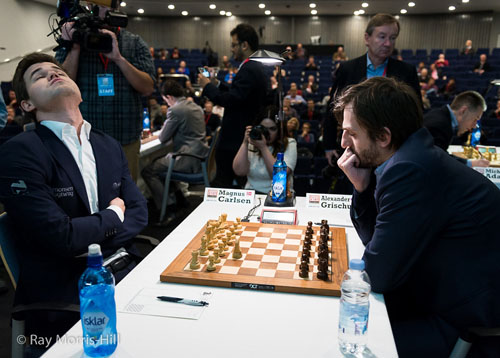 Carlsen essayed 1.Nf3, but the game ended up in a Sicilian. Grischuk missed his chances in the end when zeitnot came back to haunt him. Photo by Ray Morris-Hill.

The last round of the London Chess Classic and the last event of the Grand Chess Tour was quite a finale. Adams-Caruana and Nakamura-Topalov were anti-climatic, but there were a few games that would determine who would win the tournament and the Grand Tour. Anish Giri and Maxime Vachier-Lagrave were front-runners and decided against taking undue risks.

In Aronian-MVL, the Armenian stated that he tried to take the Frenchman out of his preparation, but was unable to get anything out of the middlegame. The game petered out into a drawn rook and pawn ending and MVL would have at least a tie for first after Anish Giri drew with Viswanathan Anand. That game was a Berlin (featured in 29% of the games). Giri drew rather comfortably and he would got through all three tournaments without having lost a game. 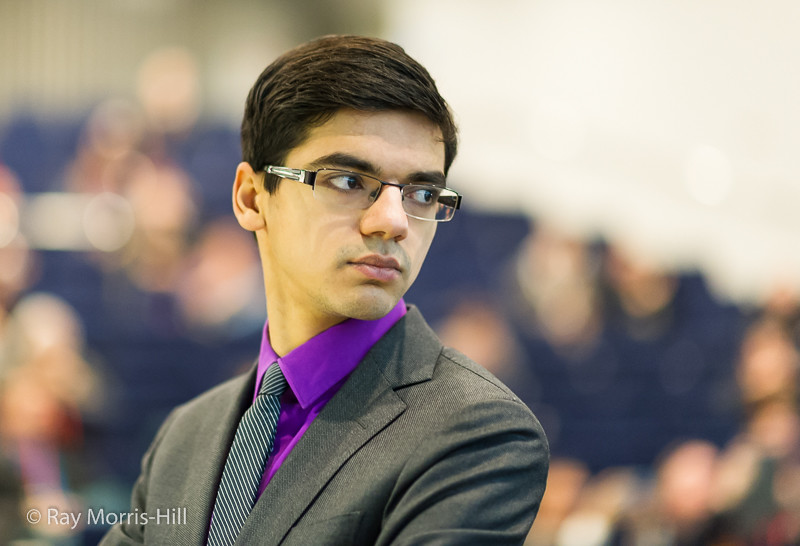 Anish Giri did not lose a single game in the tour, finished with +4, but came up just short of victory. Photo by Ray Morris-Hill.

The game of the round was Carlsen-Grischuk. The game was a Rossolimo Siclian, but followed a speculative line championed by Veselin Topalov who beat Carlsen with it at the Sinquefield. The move 7…g5!? was quite as risk for the Russian as Carlsen and his team would undoubtedly have corrected the problems in the Topalov game. Carlsen immediately snapped off the pawn with 8.Nxg5. After that Carlsen played the strange 11.Rf1!? to refocus his attention on f4, f5. Sure enough he played in ten moves later with 21.f4 and 22.f5.

The problem in this game is that Carlsen fell prey to opportunism and Grischuk fell prey to his usual zeitnot problems. The World Champion went hunting on the queenside and got his pieces bunched up while Grischuk conjured up a deadly attack. After 29.Ng4 Qh4, both players were approaching severe time pressure… Grischuk in a worse situation.

In the diagrammed position, white has to find the correct move since a draw wasn’t good enough. Furthermore, his queen and knight are on the sidelines watching helplessly… four black pieces assailing the white king overmatching the white rook and knight. Carlsen played 30.fxe6?? to the horror of fans worldwide. Gawking at this blunder commentators were banging out the variations… 30…Rxg4! 31.hxg4 (31.exf7?? loses brilliantly to 31…Qe1+ 32.Rf1 Rxg2+! 33.Kxg2 Qg3+ 34.Kh1 Qh2 mate.) 31…Qh2+ 32.Kf2 Nf4 with a strong attack.

In the tiebreak competition, Carlsen, Giri and MVL would play to see who would be crowned the tournament champion. It also turns out that this tiebreak would help determine the overall winner. However, if MVL got to the finals and beat Carlsen, the two would be tied in Grand Tour points and would have to play another tiebreak the next day!

The GrandChessTour is an interesting idea, but these tiebreaks aren't right. Everybody has to play each other for prizes of this magnitude.

In a format, that created some controversy, Carlsen sat out the first phase of tiebreaks since he had the best tiebreaks. So Giri and MVL had to play a two-game rapid mini-match (25’+5″). It was strange that it was not a round robin with all-play-all between three players. Carlsen would take a rest although admitting to watching the first game. What a match it was! 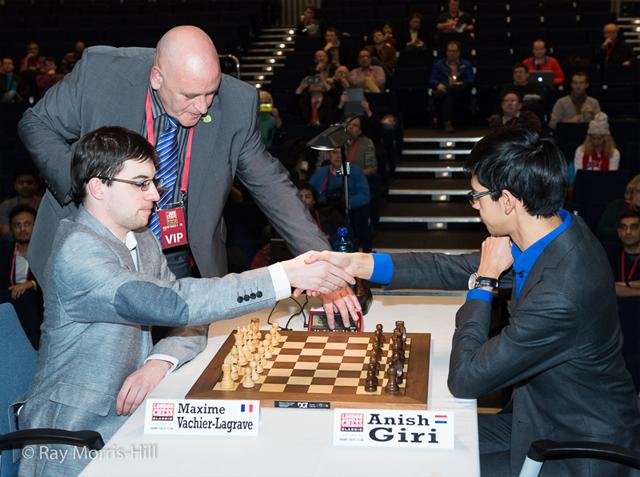 In a strange format, MVL and Giri face off in a qualifier for the final.
Photo by Ray Morris-Hill.

In the first game, it was a Berlin (again), but it showed why the defense is such a weapon in high-level play. Black risks little and gets a solid position. In fact, MVL missed a subtlety in the middlegame banking his responses on 26.fxe5+ Kg5 27.Ke4, but black has 27…Rxe5+ mating. After that Giri seized control and went up 1-0.

MVL came roaring back with an impressive win against an anti-Grunfeld. This strategy allowed black easy equality and it appeared that Giri was playing for the draw. As commentators pointed out, this is a dangerous strategy. The game was a see-saw battle, but MVL kept creating problems and soon Giri was on the defensive. In the ensuing time scramble, Giri blundered a piece and the match was tied!

In the last game, MVL had draw odds with a 6:5 time disadvantage… a draw would move him into the final against Carlsen. A phenomenal blitz player, MVL put on a strong display and outplayed Giri. In the end, he had mate in five, but went for repetition. Giri was even getting mated. Unfortunate for Giri that he went undefeated in the Grand Tour but loses in the tiebreak. he would not get a chance to face his nemesis.

Two games for the tournament title and tour title… clearly a lot on the line. There was still griping about the format. This time by Giri:

First of all he doesn’t have to play this match that I played now, and secondly he has a second chance to win the Grand Chess Tour. He can beat him in a second match after losing one.

Anyway the game started and it was a Rossolimo Sicilian. Carlsen opted for a line with a small space advantage and to basically grind MVL down. None of this worked and the game appeared to be heading toward a draw. In the end there were many ways to draw the game.

In the diagrammed position, MVL had three drawing options (Ra1, Rb1, Rc1), but he chose the wrong one! After 51…Rf1?? the king threatened to walk up the board and escort the pawn to a queen. After the white rook cut off the black king, MVL resigned. Wow.

In the second game MVL, got nothing even after sacking the exchange for an outside passed pawn. Black built an impenetrable wall and MVL had nothing to do but repeat moves. Thus, Carlsen won the London Chess Classic and would be the Grand Chess Tour champion.

What is strange is that MVL would only be relegated to 3rd place despite beating Giri. The final standings were based on Sonneborn-Berger points and not the tiebreak tournament. It also means that MVL will not qualify for the Grand Chess Tour next year. There is a fierce debate in the chess and certainly adjustments will be made in future editions. There will already be an additional tournament added in 2016.