The World Cup is currently moving into the sixth round and the elite Grandmasters are among the last four players standing, but of course there are always a number of interesting stories that surface. This one comes out of Uganda and this time the subject is not Phiona Mutesi. An unheralded Ugandan International Master named Arthur Ssegwanyi came to Baku, Azerbaijan with modest aims… to enjoy the experience and test himself against Nepali-Dutch star Anish Giri.

There were six Africans in the field as Ssegwanyi was the winner from the 4.2 zonal tournament. It is interesting that Giri is still amongst the four players left. If Giri wins, Ssegwanyi will beome part of a trivia question of who Giri had to beat in order to win the title. The Ugandan certainly surprised the chess world holding Giri to a draw despite the 400+ ELO difference.

Ssegwanyi has over the years developed a fighting spirit following his exploits at the last two World Chess Olympiads in Istanbul, Turkey and Tromso, Norway, and at the 2012 World Cities Chess Championship in Al Ain, UAE. The experience meant that prior to the World Cup, Ssegwanyi had battled against at least eight Grandmasters. This must have given him confidence to take on Giri without fear.

Both games were quite spirited in battle. Indeed the Ugandan had no fear and and acquitted himself well against Anish Giri. In the first game as white, the Ugandan first an interesting move order but ultimately had to figure out how to face the prickly hedgehog setup. In this system, white has established a bind on the light squares and black will attempt to batter down that grip with probing from minor pieces and from pawn thrusts. Actually white’s position was not optimal and black was able to equalize with the thematic 17…d5. Black arrived at a winning position, but made inaccuracies leading to an 3+2 rook ending. For 100 moves, the Uganda defended perfectly and secured a momentous draw! Tremors were sent through the hall of ca 2357-player drawing a top ten player!

In the second game, the Ugandan arrived at a slightly worse position and dropped a pawn. It appeared that Giri slowly grind out the pawn-plus game, but Ssegwanyi played actively. Unfortunately, he ceded his activity to give up both rooks for a queen. Despite the queen’s mobility, Giri’s two white rooks dominated the black queen and Ssegwanyi was unable to untangle his king from mating patterns. He resigned and enjoyed a lively post-mortem with the world #6 player. It was a good showing for the Ugandan.

He was interviewed shortly after his match. Here is what he has to say…

In addition, Hikaru Nakamura posted to Facebook encouraging after having dispatched of Zambian Richmond Phiri… 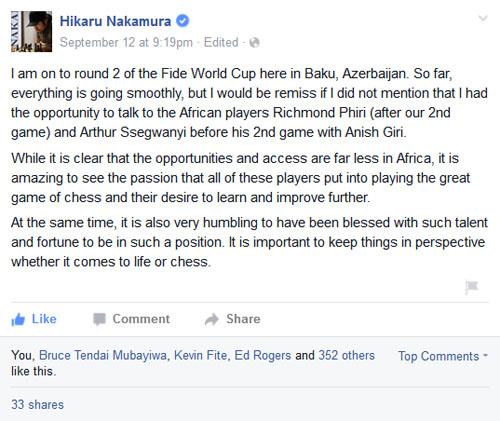 Nakamura’s observations were indeed correct. African players have a passion for chess, but perhaps the conditions are not optimal for talent development. It is a continent without the support and infrastructure of chess. The continent of one billion inhabitants has neither the government support of China or the corporate support of India to propel chess forward. Thus, the talent is often retarded and the players have to abandon chess in order to pursue full-time employment in the private sector. There are many players who may have ambitions to reach the World Cup, but until more awareness is garnered, chess will continue to be a fringe sport in the minds of African governments who do not always see the return on investment.