World Champion Magnus Carlsen won the 2015 Tata Steel Chess Tournament on the strength of his six-game winning streak. His draw against Ivan Saric of Croatia clinched the result. The victory was never in doubt after Anish Giri drew his game and ended on 8½/13. Wesley So and Ding Liren beat Loek Van Wely and Levon Aronian respectively to finish joint second with Maxim Vachier-Lagrave also on 8½/13. The tiebreak order was MVL, Giri, So and Ding. It has been pointed out that this was a tournament of the youth as the five top players above are less than 24. This bodes well for the future of chess! 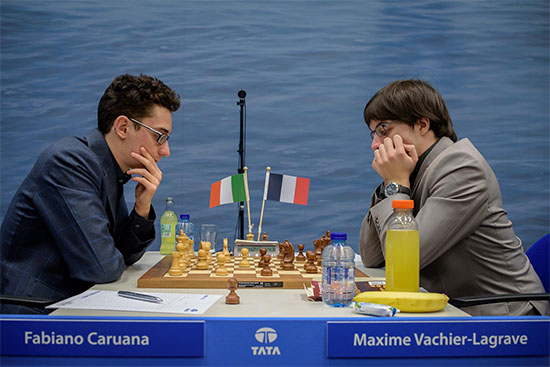 MVL was impressive in mating Fabiano Caruana in middle of the board.
Photo by Alina l’Ami.

Of course, one of the young stars Fabiano Caruana had a relatively poor showing with +1. In his final game against Maxim Vachier-Lagrave (MVL) he faced the Najdorf Sicilian and played 6.h3!? He played this against Hou Yifan and only drew, but this game would be far worse as MVL came with a creative improvement after 13…d5!? As a Sicilian player, it is the dream of black to play this move, but at second glance white has that square covered and wins a pawn after 14.Bxb6 Qxb6 15.Nxd5 Nxd5 16.exd5 Bd7. Black has two bishops control over dark squares and a looming kingside attack.

Caruana tried to lock the kingside by sacrificing a pawn, then a piece, but his king was eventually flushed out to protect white’s collapsing structure. The finale’ was beautiful as black’s razor bishops sliced through the position on both sides of the board. The final coup de grace was 30…Rxe4+! 31.Kxe4 Re8! and white was hit in a fatal crossfire. The game ended 32.Kf4 g5+ 33.Kf5 Kf7 sealing the door 34.Rfe1 Bd3+ 35.Re4 Bf6! mating.

Ding Liren mauled Levon Aronian to cap off an abysmal showing for the the Armenian. He has had a bad run of tournaments. It was only one year ago that he was hoisting the trophy as the winner of 2014 Tata Steel tournament, but something has gone horribly wrong as his ELO rating is in freefall at 2777.

On the other hand, the Chinese fared well in this tournament with a strong +4 by Ding and a par performance by Hou Yifan. The future is bright as Wei Yi dominated the Challengers section with a scorching 10½/13 and rising to 2695 on the live list. Wesley So’s star also rose with his +4 result and gaining of 17 ELO points. He now has the top rating of American players, but that could change as Hikaru Nakamura gears up for Gibraltar in a couple of days.

All in all, it was a great tournament with exciting games, a wide range of opening, dashing sacrifices, novelties, endgame masterpieces and an occasional swindle. The organizing committee did a great job assembling such a great collection of players. Even the selection of Baadur Jobava added intrigue and excitement to the tournament despite his poor result. Looking forward to 2016 when the next young star will shine. Will it be Wei Yi?

Standings after Round #13 (Masters)

Apart from Wei Yi’s strong showing in the Tata Challengers tournament, the Americans had reason for optimism as both Samuel Shankland and Samuel Sevian had strong results. 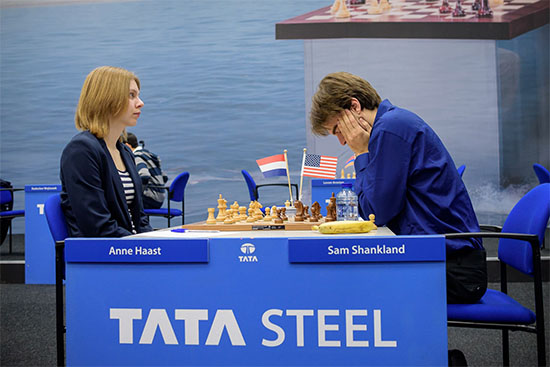 Shankland has been on an undefeated run since winning a board medal at the Tromso Olympiad. He finished with 9/13 in this tournament and has also been undefeated at the Chess Olympiad, Millionaire Chess Open, Continental Championship, Qatar Masters and the Al-Ain Open. With talents like Ray Robson and the addition of Wesley So to Hikaru Nakamura and Gata Kamsky, the American side will be strong for years to come.

The five Dutch players did not fare particularly well but Robin Van Kampen got 4th with a strong 8½/13. Unfortunately the legendary Jan Timman lost his energy after a decent start with two four-game losing streaks. He lost to Anna Haast which created a sensation and helped the Dutch women’s player earn her WGM title.

David Navara had a strong result on 10/13 and of course would be better employed in the Masters Section, but there has to be at least one 2700 as motivation for the other aspirants. Salem Abdul-Rahman Saleh was the lone representative of the Middle East and a bright talent from the region. The affable 21-year old got 7½-5½ after a slow start. Valentina Guinina has had so much success on the women’s circuit, but it may have been unsettling playing stronger competition nearly every single round.

Ranked 10th in the field (finished 9th), she had wins over three GMs, but lost some disappointing games including one against Anna Haast. Perhaps more women should be competing in the strongest tournaments and the results will improve. One of her wins was against Jan Timman who perhaps made his curtain call for elite tournaments. Thirteen rounds may be a bit much.

Standings after Round #13 (Challengers)