Anish Giri beat contender Wesley So in 111 moves to pull within a half-point of the lead. From move 36, the players went into a queen ending and So was trying to exploit the weakness of the white king for drawing chances. After and array of check the white king was marching all about the board but was able to create cross-checking opportunities and then advance the pawn. Ultimately, Giri figured out how to promote the pawn and shield his king and So resigned. This was So’s first loss since April of 2014. 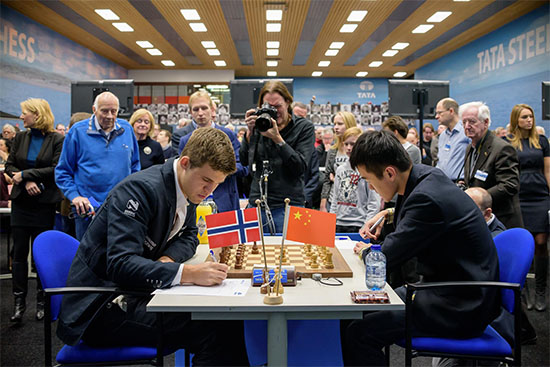 Magnus Carlsen held on from a potentially bad position to hold. Ding Liren could have played 16.f3 with interesting possibilities. In the post-mortem, he went through some calculations that were dizzying and perhaps beyond the scope of human powers. After 16.a3, pieces quickly melted and a draw was agreed. Thus, the last day will come down to whether Carlsen can clinch a victory with a win, or he his draws and Giri can pull even.

Standings after Round #12 (Masters)

The game of the day had to be the demolition of Wei Yi over Anna Haast. The opening was reminiscent of the games Radjabov-Giri and Saric Giri in the Master’s tournament. What was amazing was the fluidity of white’s attack. It became apparent that Haast simply did not see any of the moves leading up to the combination and perhaps followed the moves of Giri without much depth in understanding.

There was more bloodshed in the Challengers’ section, but none of the decisive result would have a bearing on the top positions. David Navara drew Samuel Sevian putting him a full point behind and perhaps the championship out of reach. Sam Shankland bested Erwin L’Ami with a topical line in the Guioco Piano after 1. e4 e5 2. Nf3 Nc6 3. Bc4 Nf6 4. Ng5 d5 5. exd5 Na5 6. Bb5+ c6 7. dxc6 bxc6 8. Bd3!? This game turned out badly for L’Ami as Shankland snatched the initiative, a few pawns and the full point.

Standings after Round #12 (Challengers)