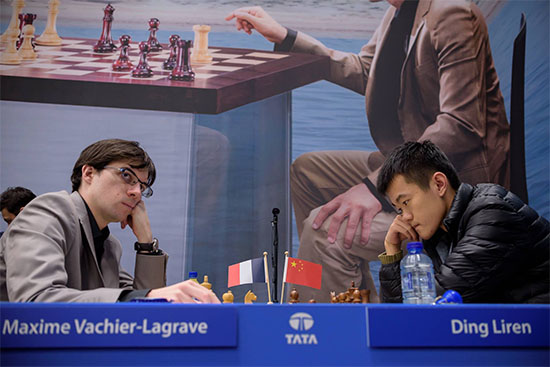 MVL polished off Ding Liren to inch closer to contention with 3½-2½.
Photo by Nadja Wittmann.(ChessBase).

Magnus Carlsen got a key win over nemesis Fabiano Caruana is an absolute masterpiece of attacking chess. This display of aggression caught many off guard including Caruana who faced Carlsen’s 1.e4 c5 2.Nf3 Nc6 with 3.Bb5, a popular anti-Sicilian line that has nice positional nuance… and scores big. In this game Carlsen, took advantage of Caruana’s unusual 11.Qb1 and launched an attack with f5-f5, g5-g4. Even after trading queens black obtained an initiative and was able to conjure up a mating attack! GM Daniel King makes the call…

Perhaps we will see another comeback from his typical sluggish starts. There is plenty of time. Unfortunately for Carlsen, Anish Giri seems to be on excellent form and is also on +1. Giri was fortunate to win today’s game against Baadur Jobava after the Georgian threw 22…Nh4!! on the board with a menacing attack. Giri had to donate an exchange to cool the attack. However, the tide turned when Jobava saw a ghost and missed the simple combination costing him a rook.

The game between MVL-Ding Liren was tactical slugfest with pieces strewn about the board. After 13.Nd5! Kf7 14.g4! Bxg4 15.Ng5+ fxg5 16.Bxg4 Nce5 17.Bxg5!? black’s position came under heavy pressure. Ultimately, white’s piece mobility gave him a lasting initiative and the Chinese #1 could not avoid losing material and the game. Nice display of power chess by the Frenchman.

Wesley So kept pace by beating Baadur Jobava after a wierd Guioco Piano saw 7.Bd5!? ceded the two bishops early. So talked about his affinity for the two bishops and demonstrated the power of these weapons. Baadur tried 14.c4 fxg5 15.cxd5 Bd7, but the bishops were soon slicing through the board. After 23…Qh4! white was soon under heavy fire… both bishops, both rooks and queen bearing down on the white kingside. Even the elimination of black’s dark-squared bishop didn’t help. Black’s 39…Qe6 forced resignation because 40.Qd1 is met by Qe2 and white has no more moves.

All the other games were hard-fought. Radjabov-Giri was an exciting Sicilian battle where both sides attacked viciously on opposite wings, but in the end the result was a perpetual check. Van Wely-Aronian also had its moments of tension but ended in a three-fold repetition. Ivanchuk-Saric was an interesting struggle that whittled down to a knight vs. bishop ending. The game with Ivanchuk having only a bishop left.

Standings after Round #6 (Masters) 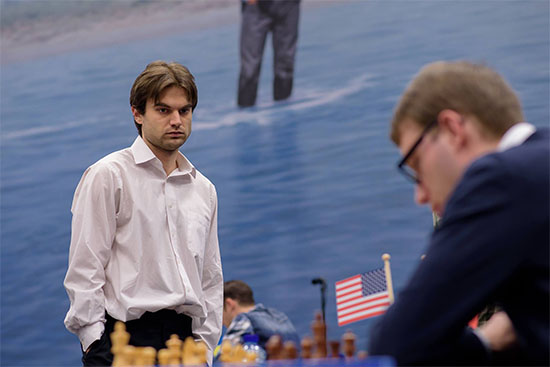 Sam Shankland weighing the position. He prevailed, but unable to gain on Navara or Wei who both won. Photo by Nadja Wittmann.

Standings after Round #6 (Challengers)