Just when it appeared that we were heading for another swashbuckling fight, the world champion ended that hope with 3.g3 instead of 3.d4. Of course, a Najdorf or Scheveningen is not where Carlsen would want to go since Anand is at home in those complications. He chose a slow system that has positional bite, but should offer black chances to gain a fluid game. That’s exactly what happened.

The game continued with a light skirmish for the center after 9…Bg4 10.Qd3. The position got a bit interesting after white played the odd-looking 15.Qf1!? but black was doing well at this point. After black made a few concession and developed a defensive posture, Carlsen was able to obtain a better structure, but black has little to worry about. Even in the end, black’s active queen was able to maintain the balance. 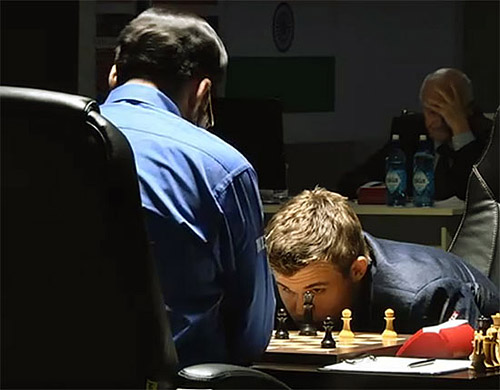 Interesting posture adopted a couple of times in this match.
Photo by Chessbase.

This game did not have much character and the press conference was not inspiring either. Carlsen criticized his play saying, “I thought I played terribly.” He appeared to be in a very somber mood often taking long pauses to deliver his answers. Anand did not have much to reveal in his answers and they seem to be laconically similar to those in previous conferences. Certainly the audience will have to prepare more incisive questions.

Here was an interesting question. Not sure if it was serious or not, but both players politely answered.

A question during the #CarlsenAnand press conference, whether the players would postpone their WC match in order to play in Tal Memorial??

What kind of Qs are these? Asking about Tashir, yesterday's game, etc. #CarlsenAnand