The first round of the 2014 World Chess Championship was definitely a bitter fight. Anand must’ve followed the advice of many and tried to steal a point early. In a unexpected Grunfeld, Anand tried to apply central pressure which caused Carlsen to eat up time on the clock. The body language of Carlsen was not optimistic, but his careful handling of the middlegame proved incisive. Anand’s space did not materialize into an attack and soon white’s weaknesses became evident. 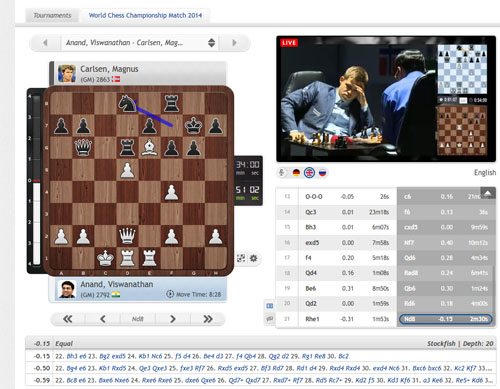 For the last 20 moves of the game, it was Anand who was fighting to stave off all types of mating patterns. In the end, the former champion found the ideal setup and was able to create counterplay on the black king. Tense moment for both players. Carlsen got the worst out of the opening and Anand had to hold a precarious ending. Nevertheless an exciting start to the match.