There was a lot begin made of today’s 25th anniversary of the Berlin Wall’s demise. When game #2 started 1.e4 e5 2.Nf3 Nc6 3.Bb5 Nf6 all the puns started about the Berlin Wall started, but Carlsen played 4.d3 avoiding a wall that has not been dismantled in top level play. Others anticipated a Najdorf Sicilian.

While there was no symbolic main line Berlin Defense on the anniversary of the wall’s dismantling, Carlsen dismantled whatever Anand erected.

Anand was looking for a playable position, but instead fell slightly behind in space. Carlsen surprised even further with 12.Nxb6!? which straighten black’s pawns 12…axb6, but allowed him a freeing 13.d4. Carlsen’s 14.Ra3 is not a typical “ROVER” but the idea is not new. The rook would soon help launch a dangerous attack as four pieces were aimed at the black monarch. 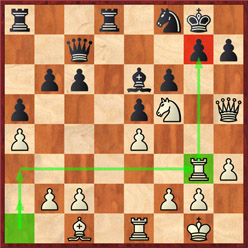 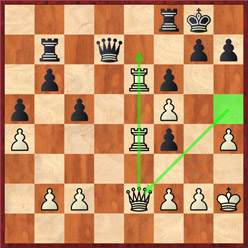 Carlsen came up with an inventive “ROVER” or “rook up and over” maneuver that eventually helped him gained an edge. Anand later collapsed under pressure.

According to the official report,

White’s strategy looked very straightforward and obvious, but it turned out difficult for Black to parry the threats. At the press-conference Anand blamed his 18th move and suggested 18…Qf7 instead, pushing the opponent’s queen away from its strong position. Carlsen agreed with him, saying he did not obtain much out of the opening apart from slight initiative. However, after 19.Rg3 he already was quite optimistic. (see reports)

While white looks to be attacking it was really a plan to seize control of the center. It was interesting how white abandoned the useless d-file, but got an “Alekhine’s gun” on the e-file to get a decisive advantage. However, Carlsen failed to strike with 29.Re7! and played 29.b3?! This allowed Anand to slide back into the game.

Anand almost fought his way back into the game, but stuff happened.
Photo from sochi2014.fide.com.

After 32.Qf3! the queen was looking to dominate the position and 32…Rxe4 33.Qxe4 f3+ 34.g3. Anand was now on the verge of saving the position until (with three minutes to make six moves) played the howler 34…h5?? After Carlsen’s 35.Qb7, the game was over immediately. It would have been quite a coup for Anand to survive such a position in time pressure, but it was not to be. (See GM Daniel King’s video and GM Alejandro Ramirez’s analysis below)