The plot thickens as Jeffery Xiong has bolted into the lead with another win. Ironically only the lowest-rated player has held him. His victim this round was Arthur Shen and allowed him to pass Kayden Troff who was held by Aleksandr Ostrovskiy. Both of these games were Rossolimo Sicilians. Ostrovskiy-Troff was a rather placid draw, but in Xiong’s case he built up a spatial advantage after Shen made some inaccuracies. 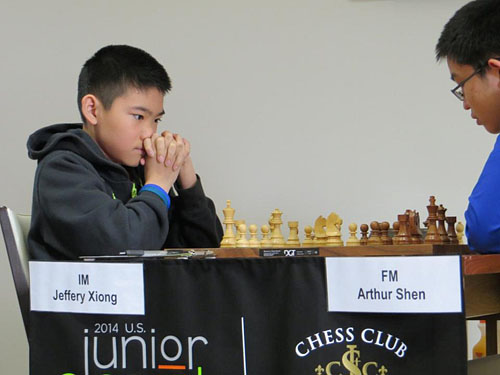 Shen made a fundamental error after 13…h6?? after which Xiong pounced with 14.Nxe6! fxe6 15. Qh5+. For the sacrificed piece, white had access to black’s weakened white squares and would capitalize on black’s undeveloped pieces. Black had to actually return the piece, but his position was already beyond repair. With heavy pieces aimed at the black king, it was the beginning of the end.

Harmon-Vellotti scored against Sevian continuing the woes of the GM-elect. This Berlin saw the queens come off on move 13. The game saw a minor piece skirmish on the queenside with white coming out with a slight edge. However, the rook ending was seemingly drawn. Black blundered with the natural 39…Kd5 when after 40.b3! was winning a pawn. If black trades queens the protected passed g-pawn would decide. Black fought to get one of the drawing positions, but could never get the fortress and ended up getting mated… apparently in a time scramble.