The Chess Drum was informed that St. Louis chess master Leroy Muhammad has passed away. Living in Gary, Indiana, his daughter Sophia Muhammad came to the St. Louis Chess Club and informed an employee that Leroy had passed in October of 2013. IM Elliott Winslow, a contemporary of Muhammad and fellow St. Louis native, relayed the news to The Chess Drum.

Born Leroy Jackson November 30, 1948 in Little Rock, Arkansas, he discovered a talent for chess in the 60s and proceeded to take the city and state by storm. As reported in “Leroy Muhammad: A Forgotten Star”

The year 1966 was magical for Muhammad. He won the St. Louis city championship four consecutive years from 1966-1969 and the Missouri State Championship three consecutive years from 1966-1968. Muhammad also tied for 1st place in the 1966 Eastern Open defeated Orest Popovych in the process. He then won 1st junior in the 1966 U.S. Open with 8½-4½ beating future legend Walter Browne (New York) and Salvatore Matera (New York). 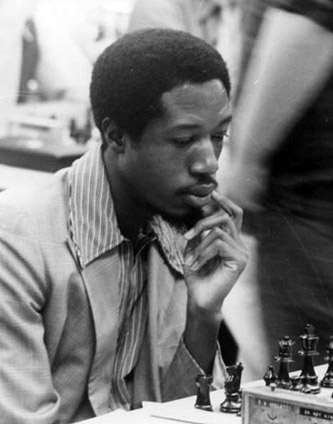 In that U.S. Open, Jackson came in 19th overall and later in the year was awarded the title of U.S. National Master! Having attended Sumner High School, Jackson also played in the 1967 U.S. Junior Invitational in New York scoring 2.5/7 (Salvatore Matera winning). Jackson discovered the nationalistic self-help teachings of the Honorable Elijah Muhammad and joined the Nation of Islam from 1972-1975. During this time, he moved to New York and adopted the surname of “Muhammad”. Despite being in the hotbed of chess, he faded from the chess tournament scene.

After Elijah Muhammad’s death in 1975, he joined Elijah Muhammad’s son, Wallace Muhammad in building a new Muslim community. He ended up settling in Gary, Indiana and made a brief comeback competing in a few tournaments in the late 70s. While he never fully came back to chess, at times he would attend small chess tournaments at the Gary Public Library.

The St. Louis chess scene was vibrant in the 60s and there were several players who knew Muhammad and witness his feats. IM Elliott Winslow expressed great memories of him from their days in St. Louis. Muhammad and his wife Annesah raised a family of six children and he was active in the Gary Islamic community for more than 30 years until his death.

Peace and Blessings.
May Allah be pleased with your good deeds. Amin.