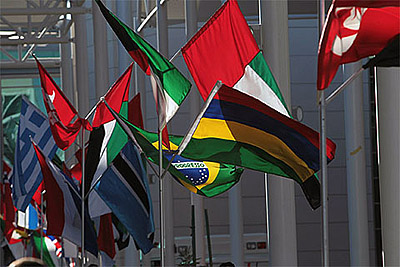 The World Youth Team Championship was held in Al Ain, UAE typically the center of chess tournaments in the Middle East. While it broke records for the largest amount of players (1773), there were a number of issues that dampened an otherwise festive event. There were complaints about the food lines, pairing snafus, broadcasting issues and overall inability of the organizers to accommodate the requests of the attendees.

It was mentioned that the organizers apparently planned without accounting for the large contingent of coaches, parents and officials as the number ballooned close to 5,000. However there was a consensus that the organizers worked hard to remedy the issues and spared no effort and salvaging the event.

However, one of the other issues was something as nondescript as the chess pieces. There were sets featuring an alteration made to the Staunton style with the crescent atop the king. This hit the airwaves and became a political firestorm with pundits accusing the UAE of “chess set jihad”. Islam-critic Robert Spencer penned an article for “Jihad Watch” where he excoriated the organizers,

“Some of the children in this year’s tournament are being forced to use these sets: here are some photos from the actual playing hall with participants using the Islamized sets.”

“As you will see, only some of the sets have this Islamic design — probably because few have been made as yet, and the organizers need thousands of sets for such a huge tournament. So the majority of sets under use are “normal” style. But even so, the Islamic supremacist implications of the new design are self-evident. This is not a big deal, but obviously it was to the Emiratis who went to so much trouble to alter the set. Why not leave it as it was? Was it because of Islam’s abhorrence of the cross?” (read post here)

Of course, there is no chess set jihad and the article is pure drivel, but it is an interesting alteration to the common sets. One may find it easy to wonder whether having a cross atop the king was an issue for chess players in Muslim countries. To enter into a religious debate, some commenters unfurled hadiths saying that Prophet Muhammad (PBUH) condemned chess and that such an alteration to the chess sets was of no consequence. Muslims should not the play the idolatrous game.

Of course, the hadith interpretations vary and chess is enthusiastically played in many Muslim nations such as Indonesia (the largest Muslim nation), Turkey, Iran, Egypt and so many others, without any issues. Since the majority of the sets were Staunton, it appears that the organizers gathered whatever sets they could find in the city (due to the shortfall) and these were thrown in with the rest. 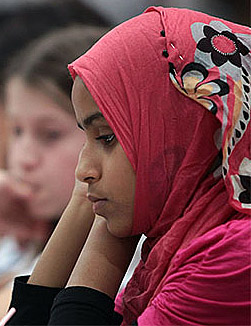 Chess actually has a diverse past. It is widely believed that the precursor of contemporary chess traveled from India into Persia across the Middle East, the Sahara Desert and across the Strait of Gibraltar (named after Moorish commander “Jibril Tariq“) into Spain.

The cross came along with the other Catholic transformations after the African Moors were driven out in the late 15th century. The queen, formerly “vizier” was given free range in honor of Queen Isabella of Spain who (with King Ferdinand) helped to fund the expeditions of Christopher Columbus.

There was also an issue concerning the Israeli players. Another firestorm emerged as the federation designation for Israel was simply noted as “FIDE”. Brickbats were swung at the organizers for depriving the Israelis of their flag. In actuality it was at the request of the Israeli delegation that this alteration be made for security reasons. A letter signed by Israel Gelfer (FIDE Vice President) Moshe Slav (Chairman-Israel Chess Federation) clarified the issue.

Yesterday the 2013 World Youth concluded in Al Ain, in the U.A.E. with the participation of 1773 players from 171 federations. The Israeli delegation which took part in the event consisted of 5 players and several accompanying persons.

During the event there were several publications and petitions from several institutes and individuals about the fact that the flags of Israel were removed from the relevant tables in the tournament and from the official web as well and replaced by flags of FIDE. We would like to state very clearly that this move was done as a result of our security people’s request and with full cooperation with the local organizers. While we believe that participation of Israeli players in events held in Arabic countries, and vice versa of course, with Israeli flags is very positive and contributing to a good atmosphere, we all realize that such events need security solutions and strict cooperation about.

We cordially appreciate all those who were standing on our rights in what looked like a breach of it but we stress again – this was not a decision or initiative of the U.A.E. authorities but ours and we would like to thank the organizers and FIDE events commission for their cooperation and for the excellent treatment our delegation was met.

Alas, what is chess without its own set of controversies. What is even worse is the fact that people (including non-chess players) have a quicker means by which to spread false information creating rancor, distrust and ill-will. Fortunately these were youth and they took things in stride. It merely shows that not even a youth tournament can avoid the vagaries of “crescent-gate” politics.

The World Youth will be in South Africa next year. Certainly there will be no alterations to the chess sets. I have seen some very nice chess sets depicting the Zulus, but I doubt if we’ll see these pieces.